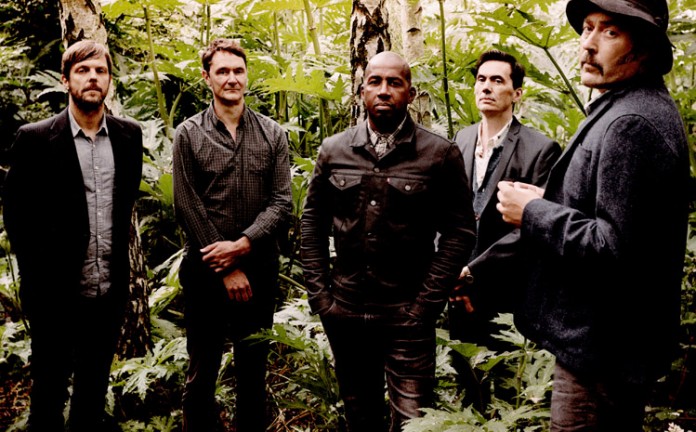 Since their last studio album of new, original material, 2012’s The Something Rain, Tindersticks have officially celebrated their 20th anniversary, and diverted into a series of film, art and live projects which frontman Stuart Staples describes as “moments of coming to terms with our past, being released from it.”

That newfound sense of freedom has resulted in a reinvigorated Tindersticks whose recently released new long-player The Waiting Room, has been lauded as one of their best ever.

Says Staples: “It took four years to create, what seemed like, a huge pile of ideas and then sift through them to find the nuggets that form this album. An album essentially made from a collection of first or second takes of shared moments, gently edited down and embellished into the songs here.”

Fellow founding member David Boulter agrees: “I think it was how we set it out to be. We veered away from that though by having brass on it, but we’ve just spent four weeks [touring] as a five-piece and it felt good to do. We’ve felt in the past that we should put strings on, but this [album] is manageable as a five-piece, this one we do justice as a five-piece.”

“We didn’t really plan to make an album, we were taking stock of what we had and were considering a series of EPs,” says Boulter. “A couple of tracks were recorded for different records and found a place on this album.”

Among the tracks which begin life elsewhere was Hey Lucinda, a duet between Staples and Lhasa de Sela, whose voice has previously graced Waiting For The Moon’s Sometimes It Hurts in 2003 and That Leaving Feeling, from Staple’s 2006 solo record, Leaving Songs.

“Lhasa de Sela was a great artist and singer but, more importantly, a close friend and creative ally,” says Staples. “Before her death in 2010, when she was fit and well, we recorded the singing for the song Hey Lucinda together. It has taken a long time for me to be able to return this recording and, hopefully, to do justice to the song we both wanted it to be.”

“It felt too good to be left on a shelf, never to be heard, and it gives Lhasa an extra life,” continues Boulter. “It’s touching, for us, that it’s found a home, that it exists.”

Another duet on the album is We Are Dreamers!, which features Savages’ Jehnny Beth, who Staples met at The Barbican, London, for the In Dreams: David Lynch Revisited concert in 2014.

“I knew that if it was going to work with Jehnny, it would take 10 minutes in the studio,” Stapes says. “And it took ten minutes. It was a second take. She was just so perfect for it.”

As the band head out on a ‘cine-tour’, performing The Waiting Room in full against projections of the 11 short films (by French filmmaker Claire Denis and others) alongside back catalogue faves, it could be the last major tour for the band for a while as they turn their attention back to soundtracks and other projects.

“After making so many Tindersticks albums we’re slowing down now. I don’t see an end to Tindersticks’ musical life, but many of us have just turned 50 and you have to ask yourself, how many more pieces of music can I make? If you are to survive as a musician you have to find different outlets. If we did another five Tindersticks’ albums, I’ll be 70!” laughs Boulter, who has just penned scores for movies Five Nights In Maine and Full Contact, and is currently working on a Czech TV series. “Soundtracks are another way to carry on making music.”