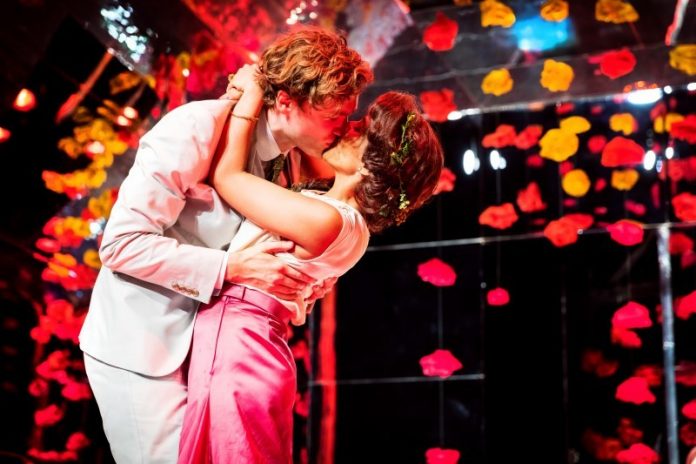 John Kennedy checks out the Oscar Wilde comedy, as presented by the Rep and Leicester’s Curve Theatre.

In this gloriously-kitsch glamour parade of mirror-preening, peacock-giddy gadflies, director Nikolai Foster has surely set the bar high for future takes on Oscar Wilde’s most-celebrated play. Set designer Isla Shaw’s Palace of Versailles explosion of almost, but just not quite, OTT ‘80s disco-ballroom glitz with Art Nouveau trappings near overwhelms the senses. But not quite enough to keep up with the frantic bon-mot banter and bombardment of taking-the-pith aphorisms. It works with all the self-conviction of a society hostess’ Caligula/Nero-themed hen night in Las Vegas.

The multiethnic cast and the decidedly-cute, teasingly-named manservant Merriman (Darren Bennett, who doubles as his more-acerbic doppelgänger Lane) lends the play’s sociohistorical context an added poignancy. The production runs concurrently with Artangel’s Inside: Artists And Writers In Reading Prison, where guests are undertaking immersive readings of Wilde’s De Profundis from the cell where he was incarcerated for gross indecency.

Unfair but true, the acid test and apotheosis of any Earnest production will be the entrance of Lady Bracknell. Perhaps now a generational cliché, where once all actors’ portrayal of her was measured against Dame Edith Evans’ iconic 1952 “handbag” eruption, Cathy Tyson’s bristling, elegant Aunt Augusta stamps her regality with impeccable authority.

The Cecily (Sharan Phull) and Gwendolen (Martha Mackintosh) glasshouse-hanging-rose-garden scene, where they surgically slice each other’s character to pieces with exquisitely-polite decorum over tea and sponge cake, is Wilde at his most-naughty genius. Nonetheless, superficially vacuous and vain, their Machiavellian manipulations are schemes of rare delight.

The denouement, as appallingly melodramatic as Wilde intended, is exquisitely timed with formulaic, Shakespearian panache. With gluttonous wardrobe design enough to cause aesthetic obesity, stinging support roles from Mollie Sugden-coiffured Angela Clerkin as the sexually-repressed Miss Prism and Dominic Gately’s plutonium-dense and pompous Dr Chasuble, this is a hot-ticket, witheringly-witty, too-good-to-miss, riotously-naughty night out.

The Importance Of Being Earnest runs at the Birmingham Rep until September 24. For more information, visit http://www.birmingham-rep.co.uk/event/the-importance-of-being-earnest-04-2016/.