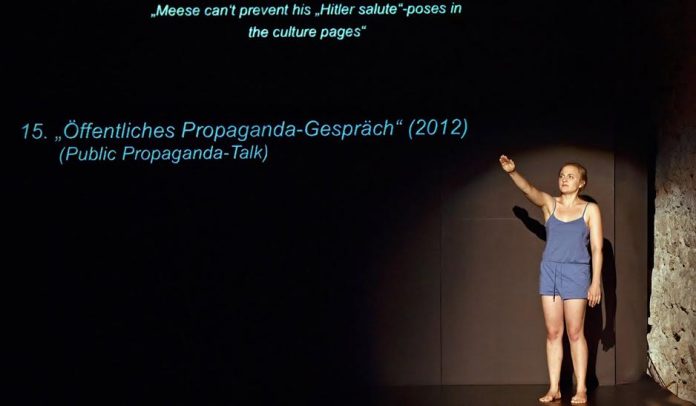 It’s the second evening of the seventh annual BE Festival, with an unfathomably diverse and eclectic pan-European palette of over 40 visiting performing-arts productions. In addition, there are many daytime workshops, talks, networking/café conversations bubbling in the background. Outside the Rep, Centenary Square transforms into a giant canvas for An We Lu Li’s poignant and evocative painted mural Leviathan, inspired by the 17th-century writings of philosopher/humanist Thomas Hobbes. The artist invites us to walk across the work, to be involved in the half-crouched/half-fetal figure. Symbolism can be drawn from Hobbes’ use of the body as a metaphor for the state and its constituent parts. On the eve of the European referendum, its resonance is palpable.

Tonight’s programme of four 30-minute performances was preceded by a Stage Door welcoming cornucopia of creative delights. The stage-set building hangar is garlanded with coloured lights, retrorama artifacts are scattered about. A BE Festival logo is projected across floor and walls. A soundstage prepares for post-show music. For purchasing drinks at the Hub Bar, a bureau de change converts sterling to the karma currency at the fixed rate of £1 = 1K (possible wild fluctuations by Friday evening?). Around and about are installations, including plasma screens of An We Lu Li’s works together with another potent reminder of the referendum’s implications, a wide-long map of Europe bearing the legend “Should I stay or should I go?” Entering the Door auditorium, the energetic Babel buzz of polylingual voices has one hoping that many a Leave voter will refrain from putting an X on their ballot paper in fear of thinking the tellers will recognize their signature.

Opening performance Stuff is a one-man physical theatre/mime from Sean Kempton. Against a tableau of music pieces he explores the themes of birth, love and death. A deliciously teasing mime set to Thus Spoke Zarathustra has him emerging from the slithery environs of the amniotic fluid and placenta. Charming micro scenarios unfold on his tabletop as his headlamp spotlights a finger-feature samba dance. In the Love sequence, audience members are literally roped into a plaintive flamenco/fado torch ballad. Inevitably, death makes his call with Mozart’s Requiem, as our character flails in rage at the dying of his light. But that was not quite the end, and Kempton puts the show to bed with a cotton-wool cuddly “amor vincit omnia” denouement. His full feature show at the Edinburgh Fringe promises to be a hot-ticket must.

The gravitas of Situation With Outstretched Arm comes in marked contrast. The immediacy of its contemporaneous, troubling context exacerbates its already-visceral conceit. A young female actress assumes the posture of the Nazi salute as a recorded narrative in German relates its historical, artistic, social and political antecedents. We become increasing disturbed by her evident discomfort, the disembodied narrator occasionally asking her, is she comfortable with her role? What does it make her feel? “Isabell, does it make you feel ridiculous?” Sadly, the impact of the back-screen subtitles is much diminished because of the great difficulty in reading them with any clarity. We understand that this production up until only a year ago had been banned in Germany because of the strict penal codes relating to any public display of the Nazi salute. The audience draws their own inferences – there is symbolism aplenty, the simplicity and austerity of the staging and lighting work to enhanced effect. That a healthy, professionally-trained and clearly athletically-able actor finds the ability to maintain this salute over a period of some 30 minutes does make one ponder the genetic potency of those beer-swilled, hate-filled white supremacists who adopt thus said self-celebratory posture as evidence of their higher breeding. A masterfully-studied minimalist tableau of compressed malignance dressed as a heroic pledge of state allegiance. The surrender of the individual will to the triumph of herd poison.

There followed an absolutely scrumptious interval supper served from the canny cauldrons and voluptuous vats of in-house food wizards Marmalade. The vast stage arena was a hive of chomping chatter lit from above by a myriad of coloured paper globes.

The second half opened with Slovenian Andrej Tomse’s alter ego Transnational Artist Heidi Blumenfeld. His/her/their mesmerizing juggling routines were a spectacle to behold. The elephant in the room, clearly even a toss and a twirl too far for “them”, was the repeated mantra that “an artist has to make mistakes”. Which, occasionally, this one did. Was Heidi’s conceit that in the pursuit of perfection errors are inevitable, thus not only forgivable but also essential, tenable? Is perfection stasis, void of further creation? Or is this a postmodernist ruse to flag up the odd fluffed routine? Conjecturally, is it just stating the obvious, with a transgender circus motif chucked in as art? Heidi and seek the truth…

The beautifully-designed and, incredibly, free events programme provides a disingenuous synopsis and image of Florentine collective Teatro Sotterraneo. The sombre Samuel Beckett allusions distract from their suspiciously well-prepared rapid narrative shifts often imploding with surreal, self-referencing comedic slapstick. Very ingenious it is. Their closing performance explored intriguing themes of broken attention spans, disconnected narratives, fractured parallel realities. This would all find coherence and resolution with the audience invited to hurl scrappy fruit and vegetables in distain at the cast’s subversion of concrete narrative mores. Also, a hybrid man/fish has an out-of-water terminal experience. Goldfish in bowls on a pedestal have a much deeper symbiotic resonance in Florence, evidently. Probably the hit of the evening when the audience cast their votes.

Principal funders and generous supporters of BE Festival are to be commended. Likewise, the professional organisers and volunteers. By now, readers will know if the UK had the vision to embrace these talented young people’s future-looking ideals of cross-cultural creativity. Or, will it be a “situation with outstretched arm” saluting a New Albion?

BE Festival runs at the Birmingham Rep until Saturday June 25. For more information, visit http://befestival.org/.