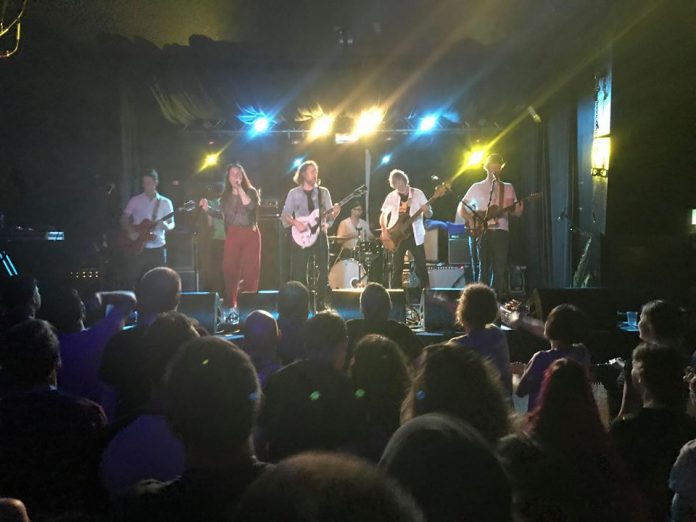 Canadian indie supergroup, Broken Social Scene have earned a cult following with their own special brand of intricate and affectionate indie pop.

With the variety of other bands it’s members belong to, they’ve been missing since the turn of the decade, until the release of their latest album Hug Of Thunder’, last year.

The group’s show at the O2 Academy in Birmingham was probably their first show in the city in a decade, so this was a long overdue return in a venue which – by the band’s own admission – was a tad on the small side for them, but with as many four guitars playing at one time, the group had no problem creating a massive sound.

Bandleader and singer Kevin Drew walked onto the stage and started chatting so casually to the audience that if you didn’t know better you’d be forgiven for mistaking him for the merch guy, subverting any idea of a big entrance. It was an endearingly low-key approach.

“This is a small show for us, they told us they couldn’t even give away tickets for the show but we said we fuck it, we’ll play it anyway.” Drew joked, and in his defence, the venue wasn’t exactly empty.

The guys kicked into ‘KC Accidental’ from their second album, You Forgot It In People. It was a fitting start. Though vocal-less, the song is a jubilant jig which flicked between time signatures and tempos like a melee of musical curveballs.

From here they cracked out fan favourite, ‘7/4 Shoreline’ and out pops Ariel Engle – a welcome female addition to the onstage presence. Throughout the show band members left then rejoined the performance, swapping instruments. It was all part of the band’s charm – that and an overwhelming sense of modesty and humility.

As they rattled through songs such as ‘Time = Cause’, ‘Protest Song’ and ‘Worldsick’, we couldnt help but be pleasantly reminded just how strong this band’s back catalogue is, and that’s hardly surprising with the sheer volume of writing talent within the band’s alumni.

‘Anthems For A Seventeen Year Old Girl’ was a definite highlight. It sparked the night’s first singalong, Engle passionately gesturing out to the crowd as she recited the song’s mantra, which was fired lovingly right back at her by a warm room of fans.

Even in this smaller space, they explored a sonic expanse with guitar sounds that ping-ponged left to right and string synthesisers which filled in for an absent violinist.

It’s a shame that set closer, ‘Halfway Home’, the lead single from the band’s most recent album Hug of Thunder, suffered from sound mix issues – it’s one of the stand out tracks on the record.

Things were put right in the encore however, as Drew headed to the back of the venue to sit on a chair and sing ‘Sweetest Kill’, a song the vocalist pointed out is not in the setlist. A nice little bonus that resulted in a lighthearted exchange between him and the audience.

Throughout the show Drew thanked us and each time – in the same breath – stated ‘we don’t know if we’ll be back’. The set length – 19 songs over nearly two hours – left us thinking he may be more serious about that than we’d like, and perhaps last year’s Hug of Thunder may well have been the band’s swan song, a final ‘hurrah’.

It would be a crying shame to see Broken Social Scene call it a day. There’s a place saved for a band such as this: keen on spreading an optimism that’s fully aware of the world we’re living in. In many ways, they seem more relevant than ever.