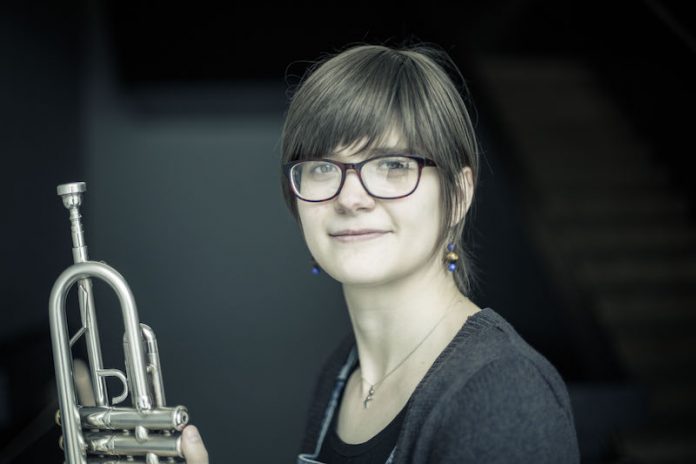 After several years as The Laura Jurd Quartet, the fast-rising four-piece have rebranded as Dinosaur, releasing their acclaimed debut album – Together, As One – at the tail end of last year.

Since coming to attention of critics in 2010, trumpeter and composer Laura Jurd has released two albums under her own name, as well as participating in a variety of other projects/ releases, including Blue-Eyed Hawk. She’s presently a BBC New Generation Artist, and was recently named as one of Culturetrip’s 10 Young British Jazz Musicians You Need To Know.

Released on Edition Records (Tim Garland etc), Together, As One, is one of the most exciting UK jazz debuts in some time. Featuring Elliot Galvin (keyboards), Conor Chaplin (bass) and Corrie Dick (drums), Jurd sees the album – which was partly shaped by playing live at such venues as Digbeth’s Spotted Dog – as being very much the product of a close friendship between the band members, a “joyous and natural experience,” which echoes with late period Miles Davis, as well as Steve Reich, electronica and more.

Tracks such as the synth-riffing Living, Breathing and slow-burning Awakening, saw the album justifiably ranked in several leading end of year polls, including Jazzwise Magazine’s Top 20 Jazz Albums of 2016, and The Quietus’ The Best Jazz Of 2016.

“We tried our very best to do everything right with this release, how the album looks, the build up to it,” explains bandleader Jurd – who answers our Qs prior to the band’s Birmingham gig (18 Jan 2017, Hare and Hounds). “We’re just really chuffed that people have recognised the effort and that people seem to be enjoying the music.” 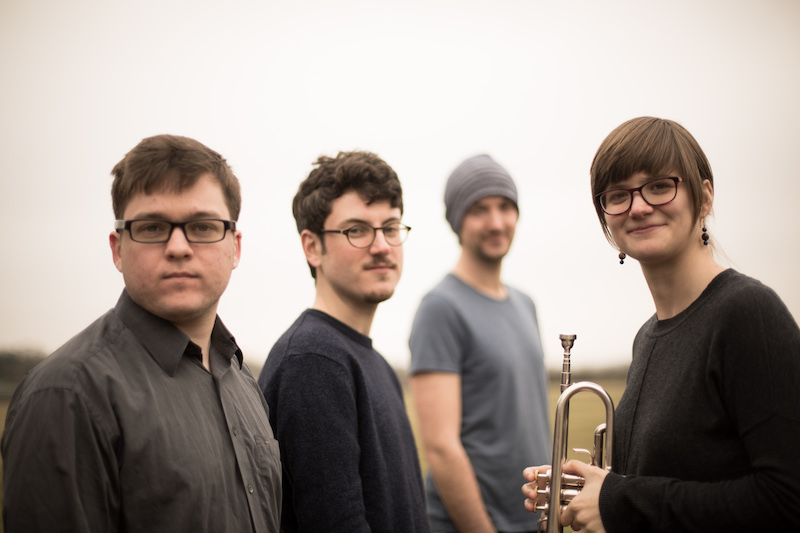 Why did you select the name ‘Dinosaur’ for the quartet?

We’d been playing under the name of the Laura Jurd Quartet and it just felt like the music had moved on from that sound. The music became more electric, more groove-based and over time I felt we’d become a strong unit as a band. I always imagined having a band called Dinosaur – it was my fantasy … skronky, extrovert, trumpet-led rock band! I wouldn’t exactly say our sound is like that all the time, but the music I was writing got closer to that kind of territory. Dinosaurs are the creatures that best represent that sound to me – plus I think they are pretty awesome! I’m sure the band will keep developing and perhaps become something completely different in the future – but our four personalities will always remain part of the sound.

You play both trumpet and synth on the new album – while they’re obviously very different instruments … would you say that your approach to them is (broadly) similar, or different?

I’m a trumpet player and that’s the instrument that I dedicate my time to. The synth plays more of an auxiliary role in the band and is used to add colour and at times an extra layer to the sound of the band. My first instrument was the piano so I’m very much at home with keyboard instruments. It’s a digital synth and it’s fun exploring the various sounds that can be created and manipulated. The trumpet is a lot more unforgiving in the sense that to keep in physical shape I undertake a structured practice routine each day. To ensure I have a personal sound and enough technique and stamina to get me through the music I’m playing requires a lot of focus, patience and mindfulness each day.

When writing that music I wasn’t particularly thinking about Miles, however being such a fan of his for so many years I think his influence finds its way into everything that I do. To me he is a complete icon – beyond the realms of jazz and trumpet playing etc. He is the master of intent. I’ve been listening to a lot of the 70s Miles album’s recently – Live Evil, Bitches Brew, Jack Johnson – they are all amazing.

You recorded the album in three days, back in March 2016, in London; how did the tracks come together/ develop? Were they fully formed by the time you stepped into the studio, for example?

Before going into the studio, I had set-up a few gigs in order for us to really familiarise ourselves with the new music. After rehearsing and playing the music in a few of the UK’s best-loved grass-roots jazz gigs (The Lescar – Sheffield, Spotted Dog – Birmingham), we had really made the material our own. By the time we got into the studio, each take felt just like another performance really. We were able to sit back and have fun getting some album-worthy takes of each tune, which made the whole process very stress-free. Saying that, it’s hard to feel stressed with such incredible and inspiring bandmates – both musically and as human beings – they really are special!

You’ve been working with Elliot, Conor and Corrie for many years now. How did you all come together/ meet? And what, to you, are the strengths of each player? What do they bring to Dinosaur that’s unique?

We pretty much all met at Trinity Laban Conservatoire of Music and Dance in Greenwich, London. I knew Conor a little before that as we both went to Alton College for sixth form. I’d say that it’s the contrasting yet complimentary characteristics of each player in the band that make it work so well. I could talk about why I love each musician until the cows come home, but here are a few immediate thoughts for now.

Conor is a complete rock. His time feel and the way he plays a groove is as good as it gets. That along with his monstrous ear for harmony and melody makes for the ultimate electric bass player! Paired with Corrie Dick on drums is a dream rhythm section. Every time Corrie hits a drum it’s like it’s the last thing he’ll ever do. He has this amazing focus and way of engaging with the present that makes his playing very special. One of my favourite things about Corrie’s playing is that the spaces in between the notes he plays feel so great. Elliot is the ultimate inventor – true composer/ improviser. With a love for so many artistic worlds whether its music, art or theatre his improvising is always brimming with originality. He never seems to let his artistic instinct become over-shadowed by self-awareness and throws his entire being into everything he does.