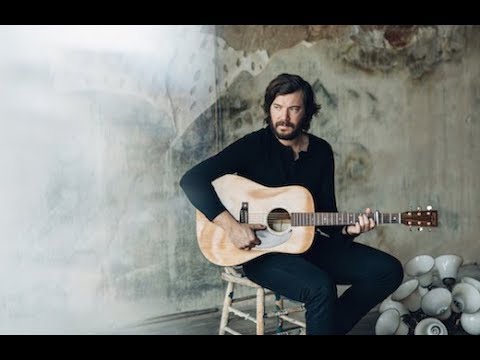 Texan Eric Brandon Pulido takes time out from the acclaimed Midlake and transatlantic collective BNQT for a solo adventure as EB The Younger.

His debut album, To Each His Own (Bella Union), si a deeply personal record, rooted in Pulido’s love of warm, glowing rock, folk and country hues that came of age in the 1970s woven with contemporary recalibrations.

He’ll be airing tracks from it at this year’s Moseley Folk and Arts Festival – appearing on the main stage on Saturday afternoon (31 August 2019).

Why did you decide to release your solo album using the ‘EB …’ moniker?

In short, I didn’t think my name properly represented the project. I don’t mind folks tagging it as ‘Eric Pulido of Midlake’ and maybe that alone is a better connection in our overly saturated world of content, but again, I felt a moniker was better suited. E.B. is actually my initials (Eric Brandon) so in a way, my name is still in there. ‘The Younger’ is an antiquated suffix used to identify a younger member of a family who has an elder with the same name. Although my Grandfather had the same initial, I wanted it to also represent that something greater came before me. It’s a good reminder for the narcissist in me.

After working in band situations, how did you find writing and recording To Each His Own on your own?

I loved it. It was very different from how we’ve historically worked on Midlake records, but part of that was just due to the logistics of time and money. It allowed for everything to be very organic and spontaneous, which I feel is often where you find the best results. With Midlake we tended to beat songs to death and risk losing the ‘magic’ that was there. There is a balance you always seek, but as I’ve gotten older I’ve tried to not be too precious or nit-picky. With the songs I wrote for To Each His Own, when taking them to record, I tried to strip back any production from my demos, sometimes just playing the song in the room on guitar, and let the band (along with producer/ engineer Matt Pence and co-producers Beau Bedford and Jonathan Tyler) help form where we’d take it. It was fun to say the least, and that is sometimes half the battle. It made me fall in love with making records again.

What are some of your personal favourite tracks on the album, and why?

Don’t Forget Me is one of my favourites on the album. It was the last song we tracked and really embodied the juxtaposition of a deeper thought or feeling while musically being a bit playful. I perform the tune without a guitar which, although normal for most, was new for me and freeing. I have a soft spot for CLP as well as it’s about my son and was influenced by our toddler years playlist of Harry Belafonte and the likes. It was nice to not feel there was any pretence, for better or worse, and allow myself to go down some musical roads I hadn’t with past work.

I hear there’s a new album by your other band, BNQT, already in the offing – do you have any details you can share?

Yes we do! This Volume 2 has a new cast of contributors and we’re looking to release it next spring. Some of us Midlakers are still the band/ producers, but this volume will feature John Grant, Shakey Graves, John Paul White, Nicole Atkins, Rayland Baxter and Marissa Nadler.

It’s 15 years since Midlake’s debut album. Any plans in the offering? Or is that it for the time being on the Midlake front?

There are indeed some plans that have recently surfaced. More on that soon…

MOVIE ROUND-UP: From Fri May 14