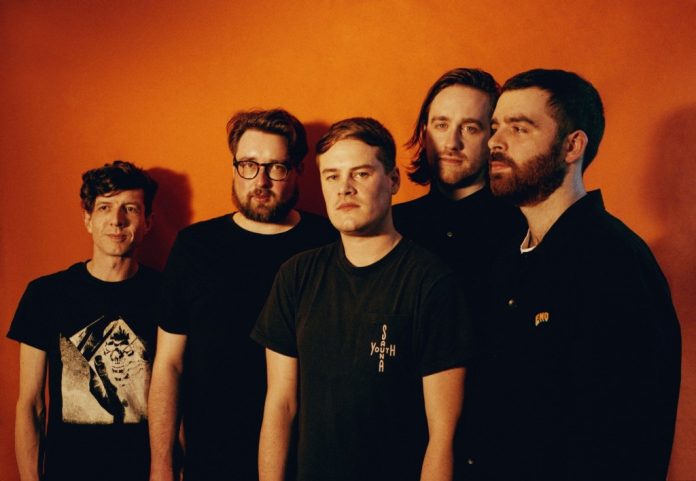 The third album from Hookworms marked a significant shift for the band. Recorded in the wake of the decimation of their studio due to flooding in 2015, the release shuns the more rock elements of The Hum and Pearl Mystic to embrace loops, samples, electronics and jams.

The result has been a revelation and their most enthusiastically received release to date.

Prior to their appearance at Lunar Festival on Saturday 28 July 2018, drummer JN chats to BrumNotes …

How was Microshift written? There’s been comments about it being more of a studio album, and more (for want of a better word) digital …

It’s worth noting first off that the bulk of our material has always been written in the studio. MJ has owned a variant on his Suburban Home studio’s from the outset of the band and, so to a degree, the two exist in tandem. A portion of the material is arranged and rehearsed prior to recording but we’re conscious that if we keep an open mind and compose and find sounds on the fly then the outcome becomes less overtly predictable.

From a rhythm perspective; I’ve always wanted to play so synth sequences and compliment my acoustic drums with machines and samples so, for me, it’s ideal.

Has working with loops and with synths presented any challenges with playing Microshift songs live?

As with all our songs, it’s wholly dependent on how they were constructed in the studio. Obviously there’s been some teething problems introducing sequencing and additional elements to the live show but weirdly we’re able to play a larger majority of the tracks well than on previous records, even those constructed from the ground up with little to no rehearsal interaction. This is largely due to the fact that the stuff that would normally be difficult to emulate live is already in MB’s sampler. Also Virginia Wing have supported us on the most of dates so far meaning we can perform the collaborative tracks (Boxing Day / Each Time We Pass) live too. There’s only “The Soft Season” left to figure out and I’m sure we’ll get there at some point.

Have the new songs changed since you’ve been playing them live?

For the most part I’d say no, though obviously there are some subtle variants, and not all of the sonic elements of the arrangements are present. But in terms of structure and vocals, they’re largely the same….which is cool.

When MJ’s studio was flooded by the River Aire on Boxing Day 2015, what was the extent of the damage?

Well, I mean the whole studio was completely flooded and had to be rebuilt from scratch …. so yes, it’s was pretty extensive. MJ got there in time to salvage a lot of his equipment and instruments but the studio, and all its fittings etc, were destroyed as well as a fair amount of heavyweight stuff like speakers and amplifiers. It was devastating and sadly MJ will be chasing up the cost of the rebuild for some time to come. Luckily he’s a good engineer/ producer so at least he has a steady stream of good work to keep him ticking over. It would have almost definitely been impossible to consider a rebuild without that and the generosity of the studios patrons who dug deep to help out with flood repairs via the gofundme campaign.

I gather that some pre-flood recordings for a planned EP and album were scrapped. Were those songs sounding more like Hum stuff?

Oh, we were already well on the way to departing from The Hum’s more straight forward psychedelic rock sound. Domino wanted us to do an EP to bridge the gap between The Hum and new material anchored around what became “Static Resistance” and a modular synth collaboration with Richard Formby which later evolved into “Opener”. So I guess those are the two tracks that really bridge the gap. We also had a couple of wild jams that I recall sounded not unlike early Liars. Kinda murky rhythms. I believe some parts were salvaged and repurposed for MIcroshift but I couldn’t say which for sure.

There’s 3 collaborations on the album (Hookworms’ first): Boxing Day (with Christopher Duffin); Each Time We Pass (with Alice Merida Richards from Virginia Wing); Opener (with Richard Formby). How did each of those collaborations come about and develop in the studio?

Opener – This came about fairly naturally as a result of MJ being friends via production work with Richard Formby and myself and MBs fascination with modular synths. Richard has an absurdly awesome modular set-up and MB had just began work on his system so I believe he was invited along to try some stuff out and generally exchange ideas. The original recording is this super lengthy Neu! style jam that was reworked a number of times before evolving into the carefully structured song that is Opener. We also performed a variant live for the opening of Headrow House, which may explain the name…but probably not. Hopefully these variants will see the light of day in some form in the future.

Each Time We Pass – Again, a fairly natural development. We play tons of shows with Virginia Wing so when the instrumental for Each Time We Pass evolved from being a proposed interval piece into a full blown arrangement it seemed like a cool idea to pass it on to Alice and see what might come of it. The resulting verses were beautiful and no doubt inspired MJ to respond and create the duet that ended up on the record. It’s the big surprise moment of the record for me.

Boxing Day – Again … an easy one. Chris Duffin plays in Xam Duo and he owns (both literally and figuratively) the sax so he had to play something on the record. Boxing Day evolved into a pretty wild jam from the outset so it was the natural choice for his input. Sam and Jonny had already recorded the shredded guitar parts so there was an obvious springboard for some atonal saxophone wailings and it worked out really great.

How do you think album number four will develop? Do you think it will be made in a similar fashion to Microshift, and continue down a similar musical path?

All I know so far is that the record will be recorded at Suburban Home by MJ but other than that who knows what may evolve out of the sessions. I hope we continue to challenge our own perception of what we’re doing and figure out new and imaginative ways to marry MJ and EO’s love of passionate emotive melodies with myself, JW and MBs more clinical, pragmatic leanings. We’ll probably just make a solid country rock record like Wilco would do … we’ll see.

What are your plans for the rest of the year?

We have a bunch of festival appearances booked throughout the summer as well some pretty huge/ scary headliners at the end of the year so that’ll keep us busy. There’s also talk of a remix release of some kind too so keep an eye out for that.