“This is Martin and it’s his dream to be in every band in Birmingham,” introduces Hoopla Blue‘s front man Adam Tomes of their elected drummer for the evening, Martin Cleveley. Hoopla Blue are evidently growing in confidence and in stage presence. It’s something that only really comes with practice, and having chosen ever so carefully a select run of recent local shows, Hoopla Blue can claim success. Tracks from their recent debut Mother EP are performed delicately and with characteristic charm and standouts are Oranges and Hummingbird and the ever beautiful, Holy Ghost. We’re proud to call Hoopla Blue local.

London’s Cymbals are next. With two albums to draw from [2011’s Unlearn and their 2014 follow up, The Age of Fracture], theirs is a collection with a good few to choose from, all sitting somewhere between Yo La Tengo and New Order. It’s catchy and it’s performed with enthusiasm but it’s a little mismatched and it’s over-simplistic in places, sounding just slightly too ABC-by-synth. The Natural World and Like An Animal are its highlights and Cymbals leave to a generous applause but there’s something which is a little unseated.

Some bands churn out track after track, catchy choruses and pop hooks and Cymbals are probably one of those bands.

Others opt to take their time, carefully crafting every last second, there’s a reason Victories At Sea let us into only eight songs tonight. They’re works of heart-wrenching beauty.

The trio begin with new track Florentine before following the course of their debut EP [In Memory Of, released last July] from Stay Positive to Dive. They’re songs of romantic melancholia, a restless struggle with sanguine optimism that defaults back to complete desolation, a restive despondency, a schizophrenic split character. Future Gold bleeds into their second new song, Bloom, and then to Into The Fire, ultimately ending in the expansive vacuum of Low and No Escape’s repeated conviction, But we don’t want to be alone forever.

Robert Merrell moves between drums and synth, Steve Edgehill between synth and bass, front man John-Paul White the underlining and inscrutable constant on vocals and guitar. It’s dark, disco, dance, unarguably uplifting, undeniably existential. There are a few hiccoughs; the move from Future Gold into Bloom proves a false start (the hazards of using a backing track) and the live drums do need turning up a notch. But it’s as strikingly evocative as ever, hinting at hope, hinting at reconciliation. It’s Victories At Sea as we love them. 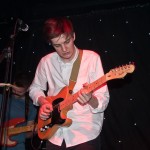 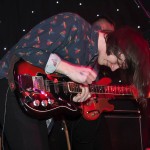 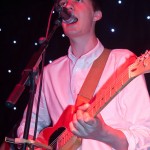 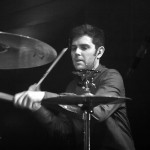