Do humans have enough hands to play the accordion and the trumpet at the same time?

Tonight marks the third installment of Nocturne, a night of folk and acoustic carefully put together by the people at Urban Fox and Boat To Row and held in the gorgeously intimate surrounds of Cafe Ort in Balsall Heath. Previous line-ups have welcomed from Birmingham and beyond Steady Hands, Oh Stockholm!, Katherine Priddy, Drakelow and The Cadbury Sisters and tonight is a bill of the best from Birmingham and London combined.

Nick Edward Harris opens the occasion. A singer songwriter from South London, in 2010 he took some time in the remote landscapes of New Zealand to craft material for his debut album Chimera, and it’s that to which we’re treated tonight. Harris sits somewhere between Andy McKee and John Martyn, there’s deft guitar work, harmonica and some really beautiful vocals. Highlights are Trap Door and Woods – you can hear both of those on Nick’s website.

Next are Birmingham’s The Mourning Suns who play a stripped back set of their distinctive 60s folk selection, performed as a four-piece instead of their usual six. The dusky vocals of lead singer Rosie Wilkes combine with those of lead guitarist Anthony Williams and an additional guitar and viola to create perfect harmonies which fall across their intimate setting like sunshine. Standout songs are Like A Dog, A Cloud and Dreaming Of An Island, which will become the title track of their forthcoming album. It’s a stunning performance with a cheeky Nirvana cover thrown in to boot – a beautifully versatile and talented collection of musicians.

Headlining the evening and bringing it to its crescendo are London’s Patch And The Giant, a multi-instrumental alternative folk outfit from London. They’re wonderfully interesting to watch – at one point we’ve mandolin, cello, fiddle accordion and percussion creating the sounds which are cleverly interwoven and textured; it’s more than impressive. Patch And The Giant play Nocturne as part of the current UK tour on which they play tracks from their 2013 The Boatswain’s Refuge EP as well as a selection of current material. They are jubilatory and they wholly immerse you. Towards the end of their set they invite Nick Edward Harris onstage to perform a cover of House Of The Rising Sun and they leave a room having won more than a few people to sing their praises. 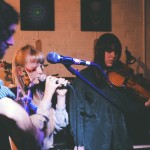 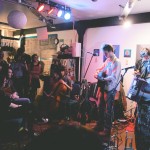