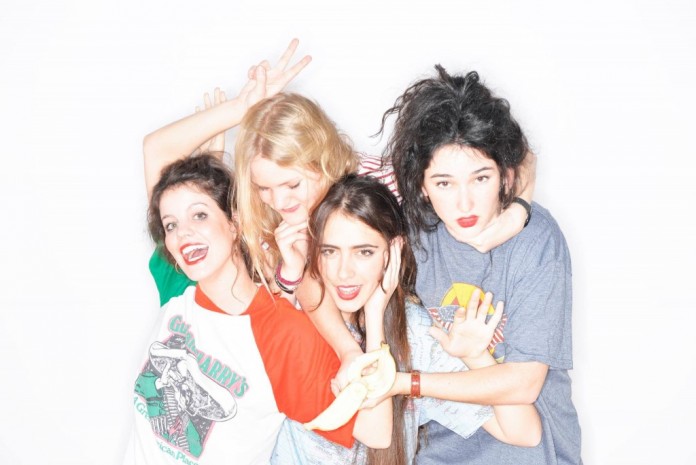 Local three-piece The Castillians surge through nostalgic 60s garage and rock ‘n’ roll without even batting an eyelid. Their new track, Figure It Out, bursts with infectious ballsy Black Keys energy siphoned up by drummer Dan Finnemore to the point of explosion.

London’s Oscar are a real treat, combining a feel-good-folksy-vibe with 80s pop. Forget Me Not pairs Noah And The Whale with Blur and perfectly characterises their dynamic, with front man Oscar Scheller applying a deep vocal veneer over the band’s tireless playing.

The gentle strumming of Warning With The Curling soon turns into a far more serious noise as it grows into a grungy drone with added kazoo courtesy of guitarist Ana García Perrote. Carlotta Cosials, lead vocalist and guitarist of Spanish girl group Hinds, trots up to the microphone and addresses the crowd with an enthusiastic “Ola.” In fact everything that Cosials says is filled with bags of Bambi style enthusiasm. “We are from Madrid and we are in a happy mood,” she continues. The contrast between the effusive Cosials and the raw guitar sound that she, García Perrote and bassist Ade Martín produce gives the band a very interesting proposition.

They look like they are having fun whilst remaining a very tight four-piece with drummer Amber Grimbergen driving the beat along. Trippy Gum’s jolly “Oohs” are light and shiny, whilst the call and response between Cosials and García Perrote on Castigadas En El Granero has shades of The Libertines’ derring-do. After the 60s girl group pop of Between Cans, García Perrote takes on lead vocals for San Diego, with Cosials now wearing a bright blue pair of sunglasses bedazzled perhaps by the crowd’s response. A Chic style stage invasion is encouraged for Davey Crocket, during which someone surreptitiously turns up the amps in preparation for the final song. Cosials is left wide-eyed in surprise when the crowd opt for a new song as the finale, rather than an old one that has already been played. She better keep those sunglasses handy as there is sure to be plenty more bedazzlement to come.