Black Country funnyman Lenny Henry will make a welcome return to his native West Midlands to star in a new reggae-themed stage play.

The Dudley-born comedian and actor will star in the stage premiere of Rudy’s Rare Records this September at Birmingham’s Repertory Theatre, in what will be his first acting role at the venue.

Based on the successful BBC Radio 4 series, written by Danny Robins and which Henry co-created as well as starred in, the spin-off play is a comedy set in an old reggae record shop at risk of re-development in Birmingham. Henry plays Adam, the son of shop owner Rudy, who reluctantly moves home to look after his dad and help run the shop. 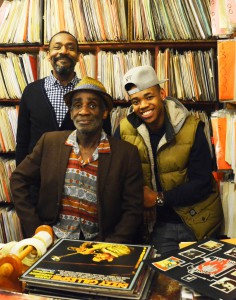 It will feature a live band on stage playing music by the likes of Jimmy Cliff, Desmond Dekker, Bob Marley and the Sugarhill Gang.

Rudy’s Rare Records runs from September 4-20 and is one of the headline attractions of The Rep’s autumn/winter season.

Lenny Henry is one of the West Midlands’ best-loved entertainers, having made his name on New Faces and Tiswas, becoming a mainstay of TV comedy and one of the co-founders of Comic Relief. He has more recently re-established himself as an acclaimed stage actor, with previous roles including his portrayal of Shakespeare’s Othello.

“I’ve performed comedy gigs many times in Birmingham over the years, but this is my first straight acting role in the city and the first time I’ve been on stage at The Rep, which is something I’m really looking forward to,” said Henry.

“Growing up in Dudley I would come into Birmingham every Saturday to hang out in a record shop not too dissimilar to Rudy’s so it’s a play that’s very close to my heart.”

Tickets for The Rep’s Autumn and Winter 2014 Season go on sale to members today (May 2) and to the general public on Friday, May 9. For more information and the full line-up visit www.birmingham-rep.co.uk.