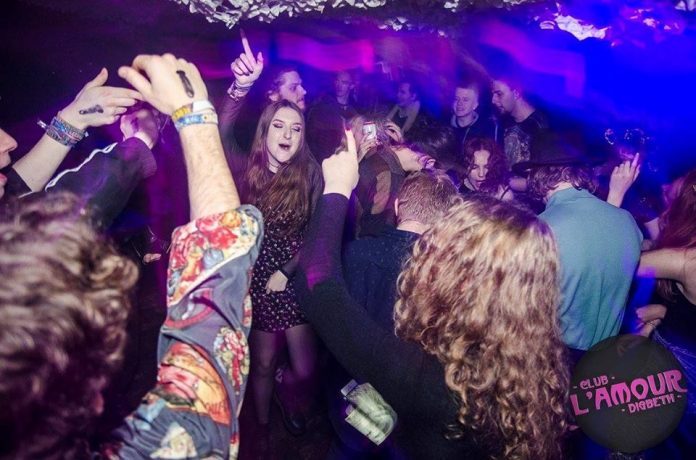 Club L’amour was a lovingly leathered night of obscure indie offcuts, a B-Town breakfast meeting of promoters and performers, and a selection of national and local bands gracing the squeezed-in, smoke-addled stage. A staple of the sesh era (i.e. 2015 – 2017), Club L’amour added further cultural credence to the dingy delights of Digbeth, boasting late-night sets from ovary-busting faves such as RAT BOY, Pale Waves and Pleasure House, as well as local bands-done-good like The Cosmics, Afterbloom and Riscas.

All good things must come to an end, and Club L’amour – which originally ran fortnightly at graffiti-riddled haven SUKI10C – closed its doors in February 2017. Since then, its stalwart, Kez Handley, has moved on to managing Riscas, and a generation raised on glittery memes and broken dreams tried to find a new hedonism hole. However, on Saturday 16th September, Club L’amour will make a hero’s return for one night only, perfectly dovetailing with the inaugural Beyond the Tracks festival. Sam Lambeth, who will be DJing, caught up with Handley to get the lowdown.

Club L’amour seemingly closed its doors for good earlier this year. Now it is back for one night only. Why now? Why ever?

Yeah, I guess we lied. I think deep down we knew it wouldn’t be the last one ever hence the ironic name of the last event! The real reason we’ve ‘brought it back’ is to support Beyond the Tracks festival, which is taking place at Eastside Park, Digbeth, a stone’s throw from where we were based at Suki10c.. It’s the biggest festival of its kind to ever take place in Birmingham, there’s a number of bands who are playing it who played for us so we got the old gang back together and thought ‘why not?’

Why did Club L’amour end in the first place? Do you feel that the Birmingham scene has struggled since its closure?

I don’t think we were the basis of the Birmingham scene, I think we certainly helped it but it’s always going to go on whether we’re there or not. If anything the indie scene is flourishing at the moment – bands like Riscas, Sugarthief, Ivory Wave, Social State, The Cosmics and Quinn (of course) have really expanded onto a national playing field, playing main stages at festivals, getting Radio 1 airplay and BBC introducing backing. Personally I haven’t seen it like this for a good few years and it’s great for Birmingham as a scene – more bands should definitely be linking in with each other. As for why we closed, it’s very time-consuming and with us all going onto other things we felt it best to end it at its peak rather than watch it decay into something shite.

Many bands, both national and local, have played Club L’amour and have credited it with helping their careers progress. How does that make you feel?

It blows my mind. Thank you to anyone who has ever said that! Knowing that we were a part of their journey is really special. For example, it’s crazy watching a band like The Cosmics play for us, then exactly a year later play Glastonbury. Incredible.

What can people expect from the returning night? And will you continue to bring it back sporadically, or is this the last high?

There’s three bands who I personally believe are on the cusp of greater things – Riscas, Sugarthief and a third act I can’t mention, although they’re riding a wave of success themselves. There’ll be DJ sets from our Club L’amour DJs, as well as This Feeling’s Harley Cassidy, Brum Radio man Tim Arstall and Jack Parker of BBC WM Introducing. We’re not too sure what’s going to happen with Club L’amour as of yet. We’re considering a number of options and talking to several promoters in and out of the city about it. I doubt it’ll be a regular thing but something sporadic sounds more like it.

Do you think Birmingham needs something similar to Club L’amour to keep local bands thriving, and give them a good place to network?

I believe venues like The Sunflower Lounge, The Flapper, Hare & Hounds and Promoters like Birmingham Promoters and Sonic Gun are already so linked in with each other, and for a city like Birmingham that’s key. It’d be nice to see an after-hours indie thing like ours establish itself and take off definitely. Too many promoters from outside Birmingham try to set something up in a huge venue thinking it’ll be a cash cow, put an event on once or twice and fail due to high costs and low turnout. Start small and build up, that was our strategy. That’s why It’s quite cool watching bands link up with each other to create something unique, for example Into the Void Festival at the 6/8 Kafe was a wicked idea. Again with Beyond the Tracks, I really believe this could be something to finally put Birmingham on the map. Kudos to John and the team!

What are your plans for the future, band and promoter-wise?

I’m currently managing Riscas and working with several other acts on the side under Hey Honey Records, we’re also looking at several events that we’re going to be putting on in 2018. Just watch this space.