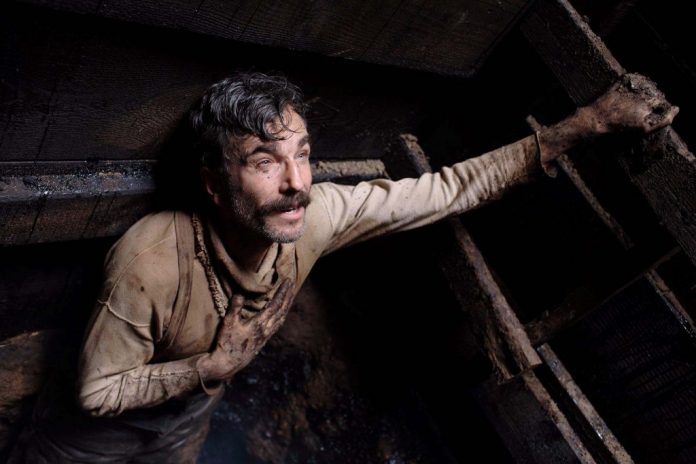 There Will Be Blood: Live is the latest in an ongoing line of concert/ film-screenings.

Written and directed by Paul Thomas Anderson, the film traces the rise of ruthless Californian oil man Daniel Plainview (an Oscar-winning turn from Daniel Day-Lewis), and a soundtrack by Radiohead’s Jonny Greenwood.

Incorporating elements from Brahams and Arvo Pärt, as well as Greenwood’s own Popcorn Superhet Receiver, the soundtrack is being brought to life by the London Contemporary Orchestra (LCO), conducted by Hugh Brunt – who answers our questions.

What are some of the key musical passages?

The opening is quite striking. There’s about 15mins where there’s no dialogue, just this incredible cinematography and music. The first piece has 25 individual string players all on a different note, and they go up and down. There’s a shot of the hills, this stark barren landscape. It’s a pretty arresting start to a film and it engages the viewer from the get go.

Then, half way through there’s the lead character, Daniel Planview (Daniel Day-Lewis) and his brother surveying the land. Jonny used an excerpt from a previous piece, Popcorn Superhet Receiver, and he asks the string players to strike their strings with a plectrum. It’s not pizzicato, not a bow struck on the strings, it’s just guitar picks, to create this particular, cool, sound.

The score also incorporates an early electronic instrument from the 1920s, an ondes Martenot. Has incorporating it into a live performance been challenging? Does it, for example, stay in tune …?

Tuning is not the biggest issue. Having it within an orchestra is the biggest challenge. It has three speakers, so the sound is coming from where the instrument is positioned, it is placed next to its source. But you have to achieve live a mix between the instrument and those around it. It can bloom, be overpowering, but that’s one of its strengths as well. In a hall, you have to go out and hear it and make sure you get the right balance.

Typically with these sorts of shows, the orchestra would be be performing with a click-track or timecode … but you don’t!?

Yes. There’s none of that guiding. What it means is doing it that old school way. In the era of silent films they did not have that technology.

There’s no technology in that respect, it’s a piece of understanding through performing and rehearsal, and making sure those hit points are hit. Between those points that means the music is freer, it’s far more rewarding when you’re not shackled to a timecode or click-track.  You can be very musical. When it’s working and it’s the very best, it feels like the orchestra is giving cues to the film. It’s like an opera, it’s well-oiled. When everyone is working  together, the sensation you have … you know when that next cut is coming. It’s a very old school way of working.

How did you come to work with Jonny?

We’ve been performing Jonny’s music since 2008, when we were starting out. The very first piece of his we played was Popcorn Superhet Receiver – a section of which was used in There Will Be Blood. We played three or four of his pieces. In 2012 we came to work with him for The Master, his second film with Paul Thomas Anderson which starred Philip Seymour Hoffman, Joaquin Phoenix and Amy Adams. That was the first time we worked together. Then we went on tour with Jonny on electric guitar and ondes Martenot. We did 10-15 shows around the UK and Europe showcasing his chamber pieces and new stuff he’d written.

It’s been a real pleasure to work with him.

You’ve also worked with Darren Cunningham, aka Actress, who’s from this part of the world (Wolverhampton).

Yes, he is isn’t he? The first show we worked on was the Barbican in February 2016 and that was working on new material – melding acoustic instrument sounds and electronic sounds, and looking at the dialogue between them – and his back catalogue. We toured that to Moscow in the summer. It was a really interesting process, we were fascinated with what the instruments received, how we interpreted what we were sending out. There was this constant dialogue between the two spaces [Actress and LCO] … so that was great. Hopefully, we’ll do more.

Any plans to release the stuff you developed from those performances?

Quite possibly .. it’d be great to thing that these pieces could reach a wider audience.

They went very well. There were quite a few of the Arthur Russell shows as there was a lot of demand, and we also live streamed it via NTS, so reached even more people. That was a great coming together of so many people’s efforts. Russell was pretty versatile.

In March 2017, you’re doing another film/ orchestra event, this time for the Oscar-nominated Moonlight …

There’s a live screening at the Barbican. It sounds amazing, we’ve been lucky to see bits of the film and it’s quite overpowering, quite overwhelming. It’s another case of music performed live that heightens those emotions. The composer, Nicholas Britell, will be performing with is on keyboards and sampler. As with earlier performances with Jonny, that helps guide us … it’s really exciting.

* There Will Be Blood: Live, with the LCO, is at Symphony Hall, Birmingham, on Sunday 5 February 2017. For more information and tickets, see: thsh.co.uk