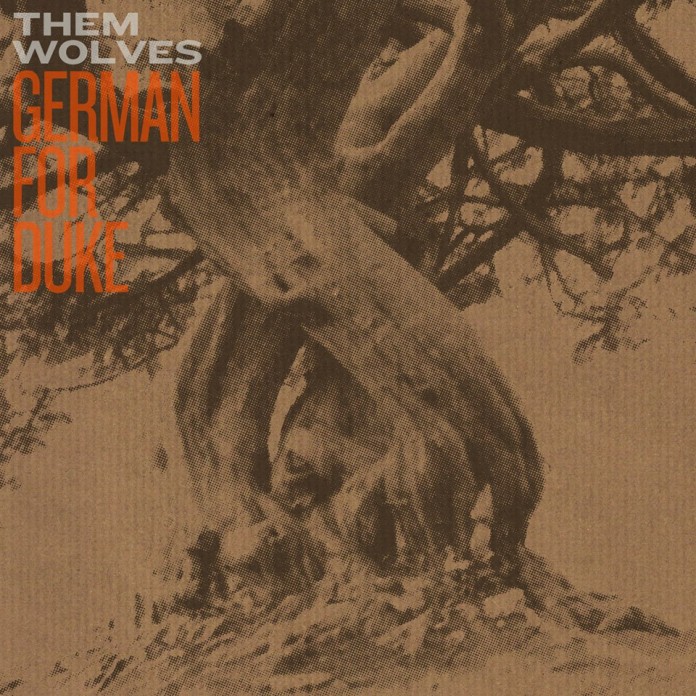 Noise rock trio Them Wolves unleash their debut EP this month and celebrate in style with a sweaty show at Birmingham’s Sunflower Lounge this Friday. Known for their lurching riffs, pummelling rhythms and unerring ability to unleash an all-round abrasive aural assault, it promised to be quite a show. We took a peek behind the masks to find out more…

“The title is a reference to a man we admire,” explains Them Wolves guitarist Stuart-Lee Tovey of the band’s forthcoming EP. “I like what he stands for and how he sees things more philosophically instead of just reducing everything to facts and figures. Plus, he has a cool voice.”

The EP in question, German For Duke, will be the debut from Birmingham noise rock trio Them Wolves and, set for release on June 24, it’ll be set free into the world courtesy of Birmingham-based independents It’s Just Noise and Distorted Tapes via limited edition screen-printed CD and digital download.

“It’s been in the works since the band started really,” Stuart elaborates. “Folding a Napkin on Terminal Island, the second track on the EP, was actually the first song we wrote as Them Wolves. But we’ve done pretty much everything ourselves as we always do so it’s been a really intense couple of months – I haven’t watched Batman since February!”

Them Wolves’ live performances have often drawn comparisons to the early 80s noise rock tendencies of The Jesus Lizard and Pissed Jeans as well as the more modern abrasive sounds of F**ked Up, Trash Talk, and Bats. Are these the types of raw and ener- getic sounds that we’ll be hearing on record?

“Personally I haven’t been listening to all that much heavy music recently, I’ve mainly been listening to The Magnetic Fields and Radio 4. Actually, there’s a really good two-hour video on YouTube of a man playing with a hair dryer.”

The band have also claimed that the record is “totally influenced by a two second clip we found in Some Kind of Monster which we looped, made big and played backwards for almost forever”.

“That’s slightly embellished,” admits Stuart. “We did sneak in an extra choice second here and there and I think Greg [Coates, lead vocals and bass] watched Apollo 13 for a bit. Noel [Campbell, drums] definitely went on his phone or saw a tin or something.” 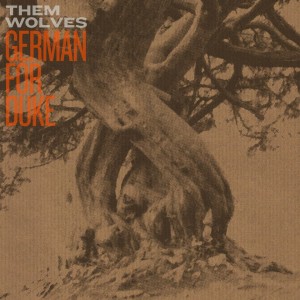 The tracklisting for German For Duke will include The Wild Girl of Champagne, Folding a Napkin on Terminal Island, Let’s You and Him Fight, You’re More Like a Young Mary Bell and Wolf Song. Were they all written specifically for this EP?

“We were just writing songs,” explains Stuart. “So when the time came to put something out, we just chose the five that made the most sense.”

The boys have also made and uploaded a video for The Wild Girl of Champagne, which is, as you might imagine, pretty sinister.

“We were trying to find someone to make a video for us but things kept falling through so in the end, we just did it ourselves. The Wild Girl of Champagne was a feral child from the 18th century, so we went with the feral idea. Then we added some folklore and a bit of horror.”

The recorded music is one thing, but their live shows really are something else. And you’re in luck if you want to experience it for yourselves, as they’ll be joining Wolver- hampton’s heavy metal heroes-in-waiting God Damn for a veritable sweatpit of a show at The Sunflower Lounge’s subterranean gig room this month. So, what can we expect?

“A nice time,” Stuart assures. “Our second and third gigs were with God Damn and that was a year-and-a-half ago now. So we are just looking forward to playing with them again. I think we fit really well together even though we do different things.”

Them Wolves are live at The Sunflower Lounge, Birmingham, this Friday, June 29, with support from Female Smell and New Alaska. Tickets are £5 and available here, or view more details on Facebook.  Them Wolves’ debut EP German For Duke (released through It’s Just Noise/Distorted Tapes) is available to stream now or can be preordered in CD format here.

This Friday’s show was originally due to be headlined by God Damn, who have been forced to postpone all shows after guitarist Dave Copson was seriously injured in a recent road accident. See details of their new EP Heavy Money here and pass on your best wishes to Dave at the God Damn Facebook page.