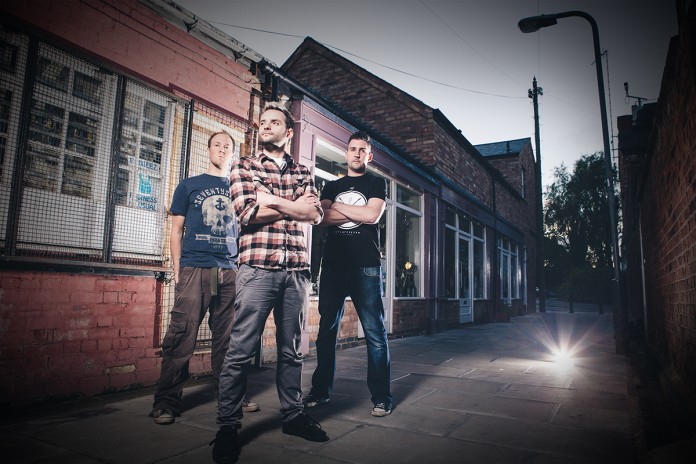 They’re so big in Europe, their Wikipedia page is only available in German. David Vincent finds out more about Brum pop-punk trio Templeton Pek.

For Templeton Pek, the decision to record their new album just outside Los Angeles was less about the sun, sea and sand of southern California, and more about the history of Hermosa Beach and the surrounding area.

“So many of the bands we’re inspired by and have toured with have come from this little area just outside of LA. So that was the thinking behind it,” reports frontman Neal Mitchell. “The whole Fat Wreck Chords and Epitaph era, 90 per cent of those bands were from this area of California – the Black Flag church (rehearsal space) was there, The Descendents here from a beach down the road, and every single band we’d listened to played in that area. We appreciated the history of where our sound came from. We went out with the guys from Pennywise, Ignite were down the road…”

Listening to Neal, it sounds less of a recording session, more of a pilgrimage. He laughs at the suggestion, but in part agrees. “That whole poppy/punky sound all started in that area. Some have gone poppier, some have gone punkier, but that’s where it comes from. It was cool for us to be where it all happened 20 years ago.”

Templeton Pek are one of Birmingham’s unsung musical exports. Formed by three friends in 2005, they were quickly tipped for big things thanks to a tight pop/punk/rock sound akin to Rise Against, Funeral For A Friend, early Foo Fighters and Ignite. But while other local acts have found fame in the UK, Templeton Pek – named after Dirk Benedict’s character from 80s TV hit The A-Team – have found themselves drawn eastwards, to mainland Europe. Recorded in New York city, their third album (yep, their third) Signs was released via monster German rock label Century Media Records (also home to Brum grindcore/metal legends Napalm Death), and demand for the band outside of the UK continues to climb.

“At the moment, the mainland and Germany are the biggest for us,” says Neal, who is joined by Kev Green (guitar) and Jon Keen (drums). “It’s different country to country, but we can play small places, like [the size of] The Flapper, up to about 7,000 if we’re with someone like Rise Against. It all depends on where, and when, and who you’re with. But we want to keep the momentum going.”

Keeping that momentum going means more Eurotunnel excursions (“we can get to Germany in 6-7 hours, we know the routine…”), plus the possibility of trips to Japan and Australia, and a desire for “a full-on, long tour” of America. But before the passport waving can begin in earnest, there’s the matter of finishing off album number four.

“We’ve just finished recording it. Everything’s down and it’s currently being mixed, so we should get the first draft mixes in a week or so’s time. It’s hard to tell how it will sound at this stage as it’s in such a rough state. We’re so nervous…handing it over to someone to mix, it’s like handing over a baby,” laughs Neal, who confesses all the tracks are currently nameless.

“They’re just Song 1, Song 2, Song 3, Song 4, Song 5…which can be really confusing when someone says ‘that part in Song 7’. Which was that? So now we’re firing ideas to each other as the next job is to name the tracks and to name the album.”

While the band struggle for titles, several tracks will be aired at a special free show at The Flapper on July 5.

“We plan to showcase songs from the new album, they’ll be played for the very first time in front of anyone, and it’ll be good for us to play them,” Neal explains, adding they’ve handpicked two local acts to support,  Jetpack and Escaping Vendetta, as part of their desire to support and share their experience with up-and-coming acts from the region.

“We played with Jetpack at The Sunflower Lounge for Oxjam and I had a chat with the singer, about how bands don’t often help each other. The way it should be is that everyone should help everyone out, share contacts, point people in the right direction. Bands assume you have to be a good band to get anywhere, but the business isn’t like that, being a good band is probably 10 per cent. That’s just how it is. We’ve never been part of a scene [in Birmingham], but we wanted to make it more of a scene as there is a community here.”

Templeton Pek play The Flapper, Birmingham, on Saturday, July 5 with support from Escaping Vendetta and Jetpack. Admission is free.