Birmingham rockers Semantics have become a staple of the local scene thanks to their taut, rhythmic basswork, glacial guitar riffs and compelling live shows.

The group, who released their debut EP recently, spoke to Brum Notes about influences, the record and what’s planned for the future.

Musically, the band has the glacial post-punk sound of Editors, Interpol and Joy Division. Do you all share the same influences? Or have some of you gotten into such bands through joining Semantics?

Josh (bass): The influence question is always something we try to avoid, but inevitably people are going to draw comparisons and form their own assumptions about who we sound like and that’s totally fine. I personally just think there is a difference between emulating a sound and having influences that drive you to do something new. Not once during our time as a band have any of us made the conscious decision to sound like any band in particular, but inevitably when you have four creative minds working together individual influences will seep through and that is what you will hear in any band.

One of the many plus points in Semantics is that you have the look to match the sound. While obviously we cannot judge / pigeonhole bands for how they look (R.E.M. being a prime example), do you feel it’s important for your aesthetic to match the sound (through your clothes, photos and artwork)?

Josh: In terms of what we wear, it just felt natural to want to dress formally/stylishly live. Performing is a big occasion for us, and we feel like dressing the way we do helps to articulate that. I don’t think it was necessarily a conscious decision to say ‘’our music has this kinda tone/sound, so we should dress like this’’. Besides it’s very rare that you will find me in a t-shirt and trainers anyway unless you have the displeasure to see me at home.

Bridie (guitar): I feel that first impressions are vital and often when watching a band for the first time you tend to forget what they were even called but for me I feel dressing the way we do helps people identify us a bit better among other bands in Birmingham. On more than one occasion I have explained who we are to someone and they always say something like ‘’oh yeah you are that band that dresses up in suits!’’

Josh: With photos/artwork we don’t like to have any direct influence on whatever is contributed to us. Photographers and graphic artists have voices, and we would be limiting their capacity to be creative/express themselves by telling them what we think would work.

Rob (vocals / guitar): We’ve been lucky enough to have worked with a number of amazing photographers and artists who share the same creative passion. We encourage any people who collaborate with us to have free expression, and so it’s a testament to their work that it fits our music so seamlessly.

Josh: The final product will always be more authentic if the person contributing is allowed to express themselves instead of being a facilitator for someone else’s ideas. Ash Rose’s work for our EP is the perfect example of this. I approached her a few months ago after seeing her artwork online about doing our EP artwork, and I gave her no instruction as to what we would like but instead told her to express herself freely. And because of that the artwork is perfect. It just felt really good for the final product to be coming from somewhere a bit more real rather than some contrived place.

Can you describe your songwriting process? Is it collaborative or do you each go away and write? What were the inspirations, lyrically, behind the songs on your new EP?

Josh: When I started the band I wanted to make the conscious effort of establishing an environment for a group of individuals to work collaboratively and lead from their own corners creatively. I think that this facilitates the creation of more dynamic music rather than one person basically telling everyone what to do. It encourages a wider range of influences to come together, and it also removes any sort of hierarchy in the band when it comes to song writing.

Simon (drums): We all have a say with how the songs are written and we all come to practice with sections/pieces of songs and we all work on them from there. The songs almost come together by themselves.

Bridie: It is just nice to have free reign with my guitar parts and feel that I am allowed to try out different things. There is always going to be compromise when working with 3 other people, but it’s interesting to see your idea’s shape and be shaped by everyone else’s.

Rob: Lyrics are always added last. The music we write normally draws out certain memories and feelings, and then from that I will get onto writing the lyrics. I don’t like going into the deeper meanings of individual songs because I like to let the listener connect in a personal way and give them the capacity to form their own ideas about what they could mean. 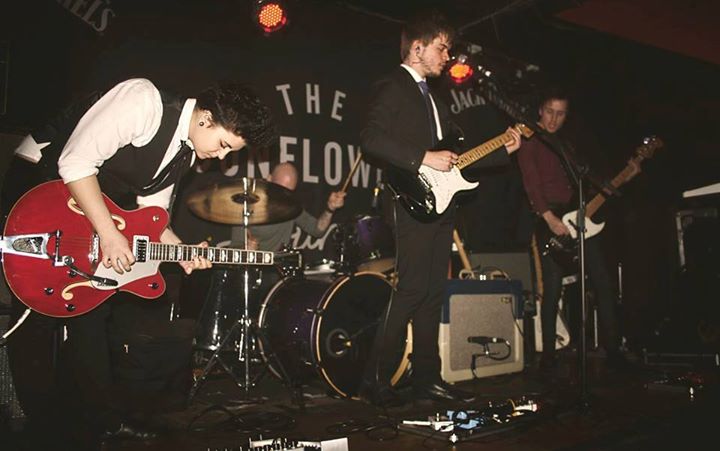 Do you feel the EP is a solid representation of your sound? Are you pleased with how the tracks have been going down live? ‘My Detainer’ seems to have become quite popular.

Rob: I feel that the EP is a good reflection of our sound considering it’s our first record. All of these songs were written shortly after the band was formed, and so it’s captured the raw energy nicely. It’s always nice when the songs get a good reception, and our two singles seem to be highlights of the set for listeners. Hopefully after the EP launch the other tracks will become equally familiar.

Simon: I couldn’t be happier with how the songs have been produced and how people react to them live. I can’t wait to get the chance to record more.

Bridie: It’s always nice to get the odd occasional cheer when the opening chords of My Detainer are played which is always really cool. It’s just reassuring to know that some people coming to see you have heard your music before, but then again playing to a new audience is just as fulfilling. ‘Games’, for example, seems to be the track that people dance to whether they know us or not!

Josh: We had great difficulty deciding what tracks we wanted on there. When we write, we always have a greater scope in mind about where the tracks could go and what purpose they have. We like what we write to come together as some form of narrative whether that be in a live setting or for when we record a full-length album. So when it came to deciding on four tracks there is always going to be difficulty in trying to showcase that.

‘My Detainer’, for example, was a song I wanted to save for an album because I felt it wouldn’t be as well received by first time listeners, however the reaction has been very different to how I imagined. Like most of our material it isn’t a track you can listen to the first time and really ‘get’, so it is really surprising to see it be as well received as it has been, especially in a time where people will only listen to the first 30 seconds of a track and decide whether they like it or not.

Like many bands, you’re a big part of the burgeoning Birmingham scene, and yet your sound is quite removed from other bands. Do you feel it’s important to stand out with your own style? But, also, do you feel it shows the flexibility of Birmingham’s music scene?

Josh: I don’t think our first concern when writing was that we wanted to distinguish ourselves among our potential peers, but at the same time we didn’t want to follow any kind of trends either. We just wanted to write music that we all loved, and I think because we approached it like that it has helped us have our own identity amongst our contemporaries.

Rob: It’s great to be among bands that have a variety of different styles. We make music that we like, just as many other bands in Birmingham do, instead of consciously trying to be a part of a wider trend. I just like that we are one of many fairly unique bands in a scene with a diverse range of styles.

Simon: I feel it’s important for us to stand out, but I’m glad it has come about naturally. We just like playing the music that we do and we like dressing the way we do. Everything else around that doesn’t really bother us.

Bridie: It’s quite exciting yet nerve-racking to turn up to gigs and be able to easily say that ‘’we are the odd ones out’’.

You recorded your EP with Ryan Pinson. What was the recording process like? And are you pleased with how the songs have come out?

Rob: Ryan Pinson is an amazing producer and he was able to see what we were trying to achieve with the EP from the outset. The songs took on a different form under his guidance, and we are all grateful for his contribution.

What are the band’s plans for the rest of the year?

Rob: We’re hoping to go on our first tour later in the year and play London and other major cities across the UK. We’ve been writing new songs and will continue to do so over the summer, before returning to the studio to record our next EP.

Bridie: We just want to keep doing what we are doing and hopefully play outside of Birmingham a bit more (not that we don’t enjoy playing here!). For me I hope to develop my style more as a guitar player because I feel I have more to express and share with our sound creatively. We just love what we do, and for me the band is everything.

Josh: As far as I’m concerned it’s going to be gigging and writing. Hopefully we can build a bit more of a rapport to finally play a show or two in London and elsewhere but I always think in the long term, and the long term goal for me is to be able to share our music with more and more people and to have a platform to do it, which we will build by continuing to write, play shows, and release new material (hopefully in the form of an album at some point with a label/someone on the same page as us).