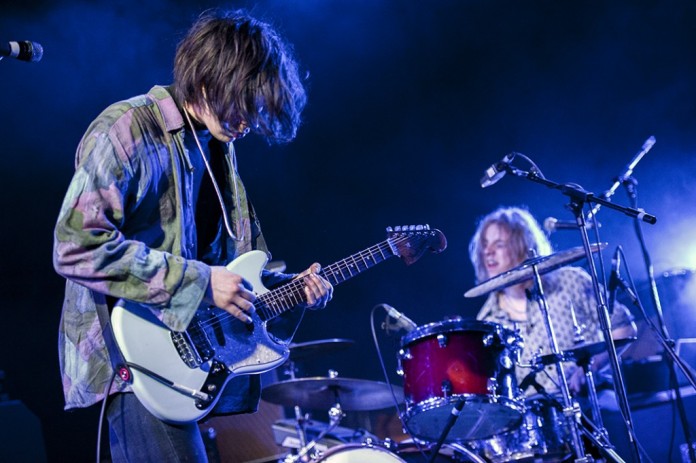 After a stellar year which has seen them grace stages around the world, adorn countless magazine covers and unleash debut album In Love upon the masses, Peace return to the city where it all began to headline their biggest show to date. We speak to a band riding high as the darlings of Birmingham’s burgeoning music scene.

There’s absolutely no getting away from the fact that local four-piece Peace have had one hell of a year. “We’ve been playing constantly, travelling constantly…I’ve also got a haircut,” deliberates lead singer Harry Koisser. But it’s a period that’s also seen them release their debut album, In Love, touted by many as one of the records of the year, play a string of massive festival dates, and grow their international fan base in swathes. In addition, the sheer volume of local young musicians they have inspired to pick up their instruments, get out of their bedrooms and form a band is an achievement in a league of its own. In the studio and already recording their follow-up record, Harry tells us about the whirlwind fairground ride of Peace’s ascent.

“We never saw ourselves as role models,” he says, “not at all – not the way that we used to behave! When we were starting out, we were looking up to Troumaca because they knew what they were doing and they taught us a lot – we were looking at them writing amazing songs and being amazing live and we wanted to do the same.

“So I guess that has sort of continued on. I don’t know what our thought process was driving forth because it was quite grim at the start – Sam [Koisser, bass] used to drive us around in his shit yellow van that wasn’t big enough for all of us and I don’t know what was making us do it other than the fact that we liked playing. If our success has helped other people get into it though, I think more people should do that.”

Originally from nearby Worcestershire, Birmingham became the musical home for the band who have been hailed as the flag bearers for music in the city during the past 18 months. Inevitably they have found themselves spending less and less time here with a schedule that takes them across the globe.

“I do miss home though,” he admits. “I was saying this to one of my friends who DJs at Face yesterday. I’ve tried my hardest to retain our links with Birmingham, but at times it seems like I’m the only one. I’ve always said that Birmingham is where we did everything at the start and so that’s where we’re from as a band. I wasn’t born there but it’s where we were for three years at the start. It’s confusing but everyone else has the same problem.”

So what about the record? A whimsy utopia of a collection incorporating some fantastic musicianship (if not including all of the songs that fans had expected), it justified the swagger that the boys set out with. 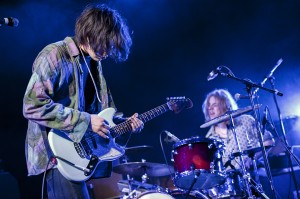 “In Love was definitely the record that we wanted to create,” Harry says. “Sometimes I think that maybe it isn’t the record we should have created but it’s definitely the one that we wanted to. Often I think ‘why isn’t there a song like this’ or ‘why couldn’t I write a song like that’ but then you can’t think like that all the time. There probably are changes that I’d make were we to record it again but only subtle ones – for what it is, it’s perfect.

“The new songs that we’re recording…there are differences but it’s us. It’s pretty much all written and being recorded at the moment – we’re much further along than we thought we would be at this stage. We have 15 songs, subject to change, but we started at the beginning of the month. We were supposed to record in January and February but because we got it written in time, I wanted to get ahead with it.”

The year also saw the foursome play on Later…With Jools Holland, an experience that Harry admits was “one of the most surreal things”, but certainly an unforgettable one. “It was cool to be able to linger for an afternoon with a load of legends. Robert Plant was there, Queens of the Stone Age and Texas. We had to fly in from somewhere and they bought us loads of equipment that looked like our stuff but was way, way better so it was a good opportunity to play with some really good gear.”

Peace return to Birmingham to play a hometown Christmas show at the O2 Academy on December 13. With support from buddies Superfood and Drenge, it promises to be a complete celebration of all the band have achieved. And with a capacity of more than 3,000, it will also be Peace’s biggest headline show to date.

“It’s going to be a real weird one and it probably won’t hit home until the night before when I’ll become an uncontrollable nervous mess, but I’m hoping to be able to keep it together,” Harry admits of the prospect of walking onstage at such a large venue. “Last Christmas we played at The Rainbow which felt huge at the time – that was the biggest show we’d ever done then as well. So to be playing the main room at the Academy a year later, it’s a real mindfuck. I didn’t feel like we’d done monumentally well this year but now I think that maybe we have!

“I’m still in planning mode but I’ve had an idea for the show which has to remain a secret…It’s going to be really good seeing Superfood again though – Dom [Ganderton, lead singer] has been my best friend for a few years. I went to his second birthday party – there’s a picture of my brother crying there – so it will be a proper old school Kidderminster [Koisser and Ganderton’s hometown] reunion. There’s a Kiddy boy connection there – I really can’t wait to be on the road with Superfood again. Plus, this is the first time we’ve been able to put on an actual show and an entertaining performance as opposed to just a gig. We’ll probably have a party afterwards too, I’m just trying to find a venue. I was going to get my dad’s band to play it but they can’t do it. There’ll be something though.”

So what’s on the Christmas list as the magical day approaches?

“We’ve all been really good this year, very well behaved,” he says with conviction. “On my list is a micro scooter which has been on our rider since we started touring. Two years later and no one’s given it to us yet so I’m going to bang it on the Christmas list.”

Peace headline the O2 Academy, Birmingham, on December 13 with support from Superfood and Drenge. You can purchase tickets, priced at £15 advance, here.