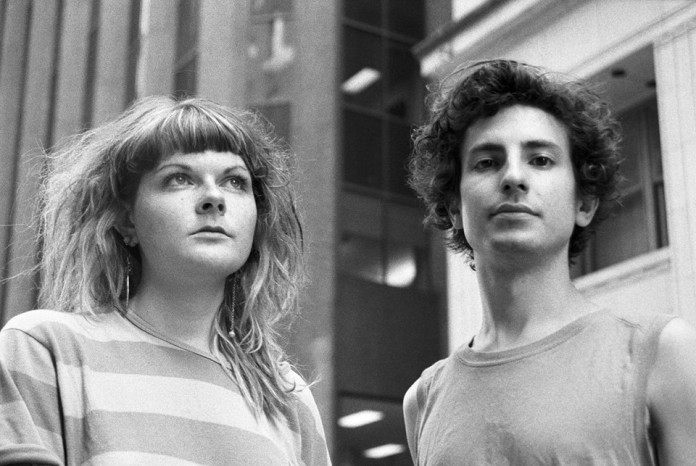 Ahead of their UK tour supporting Alvvays, we caught up with Toronto’s MOON KING and chatted to one half of the duo, Daniel Woodhead, about the influences for their new album and the burgeoning Canadian music scene.

So what are you up to right now?

I am making some t-shirts for the UK tour we have got going on.

Is this your first UK tour?

No. We came over about a year ago and did some shows. It went really well so we are coming back.

Your new album, Secret Life, comes out in April.  The latest single Roswell has a very cosmic feel to it. You can hear a definite krautrock influence, like Neu! and Can…

I do love a lot of that music. I have this theory that when a band goes on tour, they start listening to krautrock because they are in cars all the time. That German 70s music sounds great when you are driving.

It seems to be a genre of music that people constantly refer back to and it never really tires.

The interesting thing about it is that you have all these bands, even here in Toronto, influenced by these records that weren’t even released in Canada or the US. For that influence to grow over 40 years is pretty cool.

The song title, (Roswell) and band name suggest an interest in space. How much of an influence is it on you and your music?

I’ve got a good story for you about that. When we were on tour in the US last year, we got a private tour of the NASA control room in Houston. We were walking amongst the computers that were controlling the Space Station and got to go in the model version of the Space Shuttle that they use to train the astronauts. I think that’s the coolest thing I will ever get to do! How can you get better than that?

Maybe actually going into space would probably beat it?

True, but that’s unlikely at this point…we’ll see.

Your brother (Airick Woodhead) is in a band called Doldrums, does music run in the family?

Yes, our dad is a bass player, he plays folk jazz. He has been a studio musician for most of his life and that has been a huge influence on us. There was music everywhere when we were growing up. There were people coming over all the time to jam.

So did growing up in this environment have a big influence on your music?

Absolutely. Really early on I got it into my head that it was possible to do music for the rest of my life. I never thought of it as being a career, it is the only thing that I feel comfortable doing. My parents have always been pretty supportive. At 15, you don’t really have a realistic idea of what you want to do. I think I have managed to translate that into being a 20-something, still dreaming.

You grew up with bandmate Maddy (Wilde) and know her really well. Does this affect how the band works?

We have been working on tracks together for so long now that it is almost psychic. I can come up with a tune and Maddy can sing over the top and it just fits together.

Do you think that Toronto has a vibrant music scene at the moment?

Yes, there is a very good local scene but most of the bands just want to leave. Canada is a great place to live and if you can play ‘Canrock’ then you can do really well. But I grew up downtown and just want to play everywhere else. I want to go to the bigger cities and the sunny, hot places.

So any decent Canadian bands we should look out for?

There’s Tops from Montreal, we played half a dozen shows with them last year. Twin sisters Tasseomancy, She-Devils and Sean Nicholas Savage. He has been in the UK quite a bit. He does this blue-eyed soul thing. Really crafted and really raw. I played drums with him a little bit last year.

Talking about collaborations, you have played with Grimes, how did that come about?

That all comes from being in Montreal a few years ago when all these projects were starting out. There was definitely a Big Bang kind of thing and a lot of really talented artists have come out of that.

We are doing an American tour in April and I think we are coming back to the UK in May. Then maybe some festivals over the summer.