He may be one of British music’s most iconic guitarists, but Johnny Marr has never lost his motivation to keep pushing himself. Revelling in his new role as frontman, the former Smiths guitarist headlines the opening night of Moseley Folk Festival this month. He tells David Vincent why he just wants to make music that excites him.

While he’s never been far from the limelight, legendary guitarist Johnny Marr has only recently moved to the centre of the stage. As a young, shaggy haired Mancunian, he redefined the UK’s musical landscape with The Smiths. From the clipped intro of This Charming Man and swooping How Soon Is Now?, his inventive style, paired with Morrissey’s prose, signalled a return to the guitar after a period of lop-sided haircuts and analogue synths. Since The Smiths’ demise in 1987, Marr has teamed up with New Order’s Bernard Sumner for Electronic, and spent stints with such already established acts as The The, America’s Modest Mouse and Yorkshire’s The Cribs. By his own admission, he says he’s “never had a career strategy”, and it shows. But now he’s out and about as a fully fledged, all strumming, all singing solo act. There are no Healers in sight. It just says ‘Johnny Marr’ on the posters.

“I started off when I was 14-15 in bands and I was usually the frontman. So even though I’m known as the guitarist in The The, The Smiths, Electronic, my apprenticeship was as a frontman,” he says, adding that he finds his return to the role as “natural” and “comfortable”.

Marr’s debut solo album arrived early last year. Packed full of serious riffs, and with Marr proving to be a decent vocalist (who knew?), the Top 10 charting The Messenger even surprised the man himself.

“The first record, The Messenger, was really well received in a way that I really did not quite expect…it took off!” he exclaims. 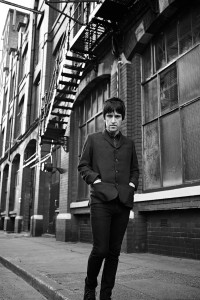 Despite the subsequent album tours, and a sidestep working on The Amazing Spider-Man 2 soundtrack with Hans Zimmer and Pharrell, Marr has still found time to pen a prompt follow up, Playland.

“It sounds just like we are live,” says Marr. “A lot of it is quite fast, up tempo, short and sharp. It feels like it moves along quickly, like modern life does.”

Musically and lyrically, the 11-track Playland picks up the baton from its predecessor.

“[It] is a continuation from The Messenger, but I do think that it’s a development from the first too. I didn’t want to invent the wheel. Some people might say I’ve tried to do that in the past,” he laughs.

“I don’t think you can ever shake off your influences. In my case there was a lot of New Wave and post punk to soak up when I let school in the early 80s. That music probably left an imprint on me. The way bands went about things then, it was up tempo,” he says. “I like playing faster music nowadays.”

While the album’s in the bag, Marr says the songs are continuing to flow.

“What I’ve been doing, they’re the very opposite of experimentation so far. I say they’re B-sides but I want them to be like double A-sides. We did some songs, The It-Switch, which was the B-side of New Town Velocity, and Psychic Beginner (with Upstarts), and they’re pretty strong tracks. The new ones [I’ve just done] could’ve been on the album without too much bother.”

From spending several decades riffing alongside a succession of other vocalists, moving from project to project, band to band, Marr says that since he found success with The Smiths, his motivation has never changed – it’s all about the music.

“It’s got to be about the music and the mission you’re on. When you’re starting out, you do it to get out of your surroundings. The motivation, when you’ve been doing it for a while, becomes something different – now it has to be all about the music, why else do it? When you’re starting out, you’re doing it to get out of your parents’ house, to get away from your crappy flat for a while, ‘cos you haven’t got a job – they’re all considerations. But if they’re no longer considerations, the only way to go forward is to make music that excites you.

“I just want to concentrate on making songs that sound great coming out of a jukebox.”