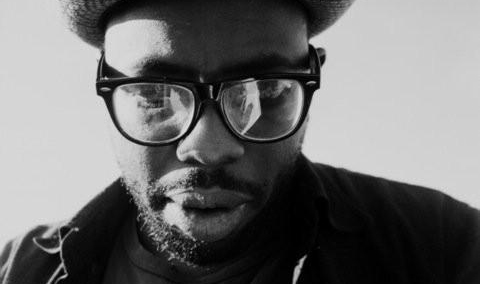 On first glance, the image that accompanies Ghostpoet’s third album, Shedding Skin, could easily be a satellite image of a coastline, the landscape scarred with peaks and valleys, the colours tweaked to deep purples and mauves. But it’s not. Nor is it an abstract painting. It’s actually Ghostpoet himself.

“It’s my own skin cell. I did a shallow biopsy and they look a piece of my skin, and photographed it under a microscope. I got the biopsy for the sole purpose of doing that,” says Obaro Ejimiwe, aka Ghostpoet, who called on a few medical contacts to get the image. It transpires that after the music, Obaro’s second big love is photography, an interest he’s followed with increasing passion over the last two years.

“I’m not David Bailey, at all,” he laughs. “I’m obsessed with framing the world through photography. I’m just looking out of the window now at the clouds and how the adjacent buildings are framed…[my photographs are] just a day in a life, it doesn’t mean anything.”

Perhaps surprisingly, given the rapidly increasing quality (and decreasing size) of digital cameras, Obaro’s medium of choice is old school film, and the nicely designed, relatively low-tech and novelty-free Lomo.

“I got tired of taking pictures with a phone. With a phone, you can constantly snap away,” he says. “I started with a Lomo camera and what I love with film cameras is the limitations. You can only take so many shots per roll, so you have to be more conscious of what you’re taking and the framing.

“I like the Lomo,” he continues. “They can be quite fiddly, so sometimes the ISO might be wrong for the film but the results could be quite interesting. Things aren’t perfect with film, whereas on a phone, they can be perfect, in terms of filters you can put on and so forth. I like the imperfections of film – you send it off to be developed, and you don’t know what you’ll get back. The framing could be a mistake, but it could be a happy accident too. I like that achievement of a happy accident.”

At present, Obaro’s photos only hang in his home, but he hasn’t ruled out the possibility of showing them publically.

“An exhibition? Maybe. It depends on how good I am at blagging,” he laughs. “It could be an exhibition or it could be a book of some sort, I don’t know. I take photographs of my immediate family, but it’d be more about the stuff around me on a daily basis, like nature and the city. It’s a hobby, but music started off as a hobby before that turned into something else.”

It’s that ‘stuff’ around him that not only fuels his love for photography, but also informs his music – “There is that crossover with my writing,” he confirms. After 2013’s dark Some Say I So I Say Light, the new album marks a clear step forward for Ghostpoet, who bought his live touring band into the studio for the first time. In the past, he’d discussed the difference between home recording his debut, the Mercury-nominated Peanut Butter Blues & Melancholy Jam, and working with a producer in a pro studio for its follow up. For Shedding Skin, Obaro’s far more confident and comfortable with the studio set-up.

“I produced all the tracks myself in demo form at home,” he says. “What was important was that I knew what I wanted to do, use those parameters of guitar, bass and drums, and make sure those demos were strong enough, so that when we went into the studio with the band, they could not become something else. There was a danger that they could have become a band thing – so the tunes had to be completed. I made sure the demos and ideas were strong enough. I produced those with my touring band’s bass player and just put the demo on the table. I’m happy with how it’s turned out, it’s a reflection of me as an artist.”

The use of guitar/bass/drums has had some fans fear that Obaro had (for want of a better phrase) ‘gone indie’. But the brooding aural tones that have made previous releases so distinctive remain – it’s just that his palette is now broader.

“I don’t class myself as an electronic artist,” he says. “I’ve had guitar and bass on tracks before, and live, I’ve always played with a band and I’ve always liked guitar. For me, it’s a progression. Before making this record I was listening to a lot of Nick Cave & The Bad Seeds, TV On The Radio, Massive Attack, Interpol, The National, bands I’ve loved for a long time. This has been natural for me.”

While there are still plenty of dark corners across Shedding Skin, overall, it seems more optimistic than previous collections.

“I’d say so, yeah, it’s more optimistic,” Obaro agrees. “I’m in a much happier place, mentally, now than I was. I always try to make records that are a reflection of the time. But it’s a combination – things aren’t great in many ways, but in other aspects, they are. I like to look outwards…it’s a combination of cases of looking at the world around me, taking in feelings that are in the air, and photography played a big part in that.”

Alongside his own distinctive voice, Obaro has called on a number of guest singers including Nadine Shah, Maximo’s Park’s Paul Smith, Melanie De Biasio and Etta Bond.

“Matching the person with the song is based on a gut feeling,” he says of the process of selecting vocalists for particular tracks. “I wrote all the lyrics and I’ve always written choruses with a particular voice in mind – a particular type of voice, not a particular person. Then I go about trying to find that person and find out if these people wanted to do it. You never know if they will or if that voice in my head that I heard matches the sound that’s coming from the speakers. With this record, all the voices felt right. Because I wanted to make a guitar record, I made sure I used people who were familiar with that world, like Paul and Nadine.”

Also back, after guesting on Some Say…, is Lucy Rose, who appears on Sorry My Love, It’s You Not Me.

“I like Lucy’s voice, it’s kinda fragile but has feeling to it and it helps that she’s a lovely person. I don’t like working with arseholes,” he laughs, before quickly adding, “not that I’ve worked with any arseholes.

“Off the back of working with Lucy the first time, we’ve become friends, it made sense to ask her again. Before she’d even heard the song she said ‘Yep. I’ll do it!’”

Lucy hails from Warwickshire, while Obaro spent many years in Coventry, studying and working. “But we never met in Coventry,” he interjects. “I was there from 18 to late 20s. We met in London, when I came back to London and she’d moved down. But we have Coventry in common. The first time we met was when we recorded Dial and she turned up with a Coventry City woolly hat on, and we instantly liked each other. You don’t meet people from Coventry much or who’ve been sent to Coventry, so it was nice to chat to her about Coventry.”

“Your stock rises when you release an album, there’s a buzz around your name, and I want to use that as an opportunity to find other avenues to be creative,” he explains. “That might be collaborations. I’d like to do more extreme stuff. I can get away with anything with Ghostpoet – I don’t do Ghostpoet to please other people – but like with all other artists or bands, whether they admit it or not, they’re creating a brand. I’ve been cultivating that [Ghostpoet] brand, so I don’t want to push it too far, and that’s fine.”

Of the desire for collaborations and projects outside of the Ghostpoet name, he says: “I’d like to write pop stuff, be a lyric writer for someone else, try different things, different extremes that I could not get away with at the day job. I’d like to do stuff with other artists. But we’ll see, see how this year goes.

“I feel more energised this time around. I want to see how far I can push it creatively.”

Ghostpoet is live at the Hare & Hounds, Kings Heath tomorrow, April 8.  His latest album Shedding Skin is out now via PIAS.