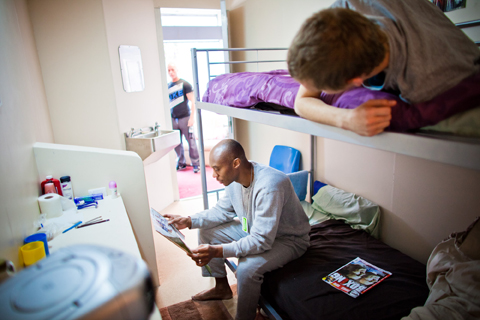 Ever wondered what a real prison cell was really like?

For most of us, our perception is based solely on media constructs – from Porridge and Shawshank Redemption to Wentworth Prison and Prison Cell Block H.

Those fictional portrayals are challenged by Go To Jail, an experiential theatre-based project from Stoke-on-Trent’s Rideout.

Based at The Library Of Birmingham (until 12 March 2016), Go To Jail features a replica prison cell, built to Government guidelines, and housing two former inmates turned actors.

In the Library’s third floor Gallery, the 3.7m x 2.5m structure contains a bunk bed, two chairs, a basic desk unit, sink and metal toilet, plus a few books (including The Koran and Bible) and (if they’re lucky) several ‘privileges’ such as a CD-player, and possibly a TV.

In the real world, prisoners can spend up to 23 hours a day confined in their cell.

The project was conceived to get people thinking seriously about the issue of crime and punishment, and dispel the myth that prison is ‘a holiday camp’ for some offenders.

Visitors can visit the cell at any time during opening hours, and stay for as long as they like, chatting to the two inmates about life in the UK’s increasingly overcrowded prison system, and how it affects those incarcerated.

Following two male inmates (1-5 March 2016), the cell now houses two female ex-offenders – Sally and Tracey. Their experiences of prison can differ from their male counterparts, yet continue to challenge the oft used stereotypes.

Go To Jail is at The Library Of Birmingham, third floor Gallery, from Tuesday 8 to Saturday 12 March 2016, 11am to 4pm. Admission is free, drop-in, no prior booking is required. For more details, including a live stream, see: gotojail.info