Another new opening for John Bright Street (joining Cherry Reds and BrewDog plus, of course, old favourite The Victoria) and bringing a little more Caribbean colour to Brum’s dining scene, this is the seventh outlet in the rapidly expanding Turtle Bay chain. You can see why it’s been such a success in a relatively short space of time (interestingly enough the same people started Las Iguanas). From the minute you set foot in the place right through to when you emerge stuffed full of spice, rum and plantain the whole experience is, well, irie-ly enjoyable.
After a particularly friendly greeting (all of the staff seemed genuinely happy to be here) you’ll want to take in the interior, which is decked out in a kind of shanty-town chic, with old stereos and speakers lining a corner of the room, a central island bar, corrugated iron on the ceiling and some funky oil drum lightshades helping to create a nicely chilled out atmosphere. Happily the same degree of thought’s gone into the food and drink with an impressive range of 30+ rums on offer (you can just pop in for a drink), some truly classic Caribbean dishes and prices that won’t break the bank or bring down your buzz.
Kicking off with delicious Passion Rum Punches (2 for 1 during ‘Happy Hour’ – 12-7pm then 10pm-1am). our appetites were whetted for starters of ‘buss up shut’ Pepper Roti and a Lamb Pattie. The roti, slices of flatbread stuffed with potatoes, cheese and scotch bonnet peppers, was crunchily crisp on the outside and soft and gooey inside with a warming but not overpowering spicy heat. The generously proportioned pattie was stuffed full of lamb, putting pretty much all Cornish versions to shame. Again it served up a nice zing of heat without blowing your head off.
As you’d expect if you can jerk it it’s on the menu…chicken, ribs, pulled pork, burgers…no puddings yet but I’m sure they’re working on it. The roasted jerk Pulled Pork Bun was cooked to mouth melting perfection without losing its distinctive meaty texture, the warming marinade ramped up the dribbling juiciness even further and the sweet chunks of roasted red onion added a neat contrast to the dish. It’s this combination of sweet and heat that lies at the heart of some of the best Caribbean food and the other main of Jerk Chicken Wrap packed a similarly well balanced punch. The flatbread itself could perhaps have benefited from being heated up a little more to soften it but that’s a minor quibble. Both dishes came with crisp on the outside and soft on the inside sweet potato fries and a delicious spoonful of fresh and fruity Caribbean slaw. As an extra side order we plumped for a generous portion of sweet fried plantain to help soak up the alcohol from the second cocktail, a wonderfully summery confection known as a Jumbled Julep (white rum, Passoa, fresh strawberries, mint and apple). Pudding? It would be rude (boy) not to and what jerk is to savoury dishes, rum is to puds. The BBQ Pineapple was well cooked but perhaps the rum caramel sauce could have done with an extra shot (although after the cocktails and spice our tastebuds may have been a little desensitised). The Caymanas Rum Cake though was a triumph. Whilst this is one of just a couple of dishes they buy in (I believe that everything else is prepared and cooked onsite), you can taste the reason why. Even after a cocktail or two the rum flavour really burst through, whilst the cake itself was still just about light enough to eat without having to undo your trousers (never a good look).
As chains go, Turtle Bay is one of the better examples with great grub, some genuinely quirky touches, friendly service and impressive value for money. Just go…you’ll have a ‘rum’ old time. 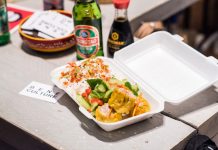 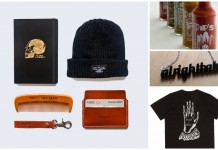