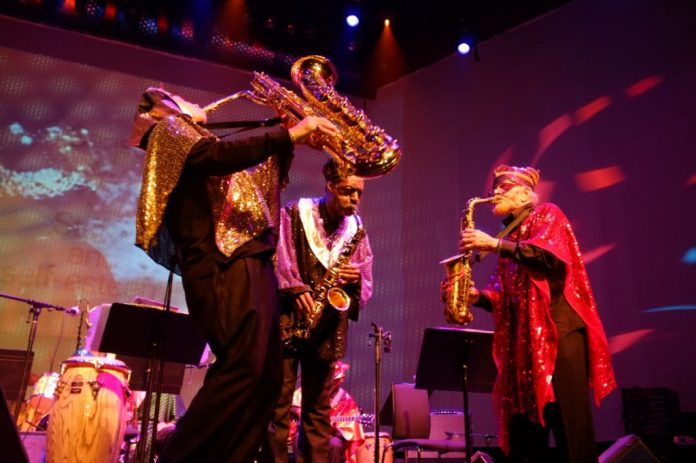 Born in Birmingham, Alabama in 1914, the late Sun Ra is one of the greatest jazz figures of the late 20th century. Garbed in flamboyant and colourful attire, Ra and cohorts combined space age and Egyptian iconography at a time of Black Power and civil rights.

With a bewildering back catalogue of releases (key works include Space Is The Place, The Heliocentric Worlds of Sun Ra, Cosmos, New Steps and Lanquidity), their influence has seeped across musical genres. Lady Gaga, Solange, Sonic Youth and Yo La Tengo are just some of the contemporary artists who’ve referenced Ra, while it’s hard to image Funkadelic or Earth Wind And Fire existing without Sun Ra.

A pianist and band leader, Ra’s style ranged from retro swing to avant free – often in the same piece. His band could play a swinging jazz standard and soar into a free cosmic jam without a pause.

Following the ascension of Sun Ra in 1993, and John Gilmore in 1995, the position of Arkestra Musical Director has been assumed by saxophonist Marshall Allen.

A member of the Arkestra for 60 years (20 years longer than Sun Ra himself), Marshall continues to be committed to the study, research, and development of Sun Ra’s musical precepts. Under his direction, the Sun Ra Arkestra moves forward with new music and new arrangements.

If you saw the Arkestra perform an incredible set at Lunar Festival in 2015, or Mostly Jazz way back in 2010, you’ll have an idea what to expect.