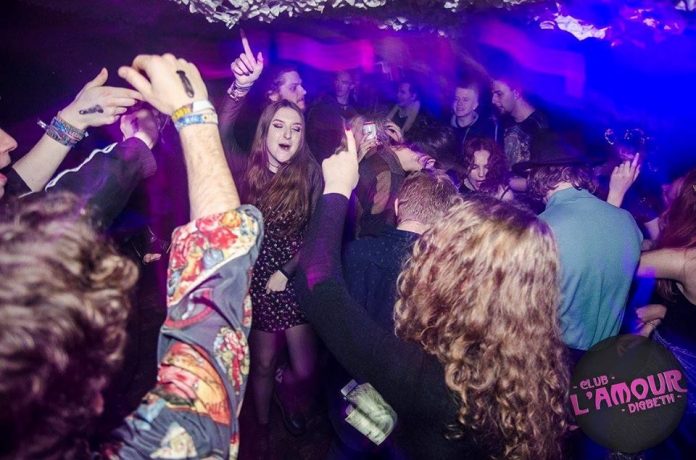 Digbeth is something of a Pandora’s box – you can visit it a number of times, and on each occasion uncover another jewel in its crumbling crown. One such pearl has to be Club L’Amour. It may not have slayed Snobs or pilloried Propaganda, but over the past two years, it has continually provided indie purists with a platform to hear and play some of the scene’s most exciting sounds. Now, after twenty-four months of bacchanalian abandon, it has announced its last ever show.

The fortnightly event, which is hosted at the multicoloured Canaan that is SUKI10C, will officially bow out on Friday 3 February. During its tenure, it has enticed acts such as RAT BOY, Pale Waves and Ash Mammal onto its smoke-riddled, sardine-sized stage, as well as local legends such as Gleam, Afterbloom, The Cosmics, The Assist and Semantics. More than that, though, it has been as an indie Byker Grove, an after-school club for those that lie in bed listening to Loveless, dream of owning a frozen banana stand and want to hear bootleg live versions of DIIV announcing where they’re from.

For many of us, Club L’Amour has served as a sanctuary. I, like many, was originally skeptical when I first made the trip (in fact, I’m sure I had 9-9 dialed on my iPhone as a precaution), but one year on, I am so glad that I was able to indulge in its atmosphere while I could. I have seen and made friends with an innumerable amount of bands, both local and touring, as well as hearing some of alternative music’s finest cuts.

What can be said about Club L’Amour that hasn’t already been uttered already? When I first came and was subsequently bathed in a grimy salvation, I made it my mission to try and get the club more established; I wrote about the club night for every publication I could, tried to cajole all my friends into visiting and even tried to make my nan host her 70th birthday party there (she went to a Harvester instead). Such was the impact it had on me, and I’m sure I’m not the only one – a range of people have credited the club with helping them make valuable contacts, play brilliantly gloomy gigs, and fall in love and Xanax.

Then there were the cast of characters. In one corner would be Benny C, thumbing through his scarily organised CD binders with surprisingly steady precision. In another would be Josh Rochelle-Bates, struggling to stand up under the strain of his all-leather ensemble. Nicole proved a more than amiable host, drawing anything from breasts to basses on our hands while Kez adjusted his beanie with gentlemanly accuracy. It will be a shame to see it end.

More details are to be announced soon, but as Club L’Amour closes its doors, the indie outcasts must shake off the dust and find somewhere else to down their aesthetic sorrows. Until the 10th anniversary edition, that is. At least then we can bring our kids to the sesh.