With the summer holidays over, it’s time for Brum’s cultural scene to get serious again.  An outstanding week at the Rep kicks off from Thursday (September 4) with Rudy’s Rare Records, a stage adaptation of Lenny Henry’s Radio 4 comedy, charting the intergenerational relationships of a Brummie family running a reggae record shop.  With the threat of developers looming, the family need to put their differences aside to save the shop’s future.  Check out p16-17 of this month’s Brum Notes for an interview with the show’s writer Danny Robins.

Also beginning at the Rep on Thursday (September 4) is Grounded, a fantastic one-hander from London’s Gate Theatre, in which a hotshot fighter pilot has to exchange the thrill of the skies for the dislocation of remote-controlled drones after she falls pregnant.

Then, opening on Wednesday (September 10), the Rep has the captivating story of The Russian Doctor.  It follows Anton Chekhov’s three-month trek through Siberia to the remote Sakhalin Island penal colony, a journey which informed his 1896 play The Seagull.  The show is the work of an all-star cast of creatives, including cutting-edge projection design from 59 Productions.

On Saturday (September 6), the Mac plays host to The Hitchhiker’s Guide To The Family, a work in progress from poet, playwright and actor Ben Norris.  Feeling somewhat distant from his father, Ben planned out a whistle-stop tour of the key places in his dad’s life, dropping in on his friends and family members and ending up at Wembley Stadium, home to his beloved Luton Town’s 1988 Littlewoods Cup victory.  We talk to Ben on p14 of this month’s Brum Notes.

The Mac’s also a host venue for the 2014 British Science Festival, which begins on Saturday (September 6).  Amongst the host of events taking place across Birmingham, the Mac has a range of thought-provoking performances – including Are You Lonesome Tonight? on Sunday (September 7), Ellie Stamp’s examination of delusion and madness, A Cure For Ageing on Tuesday (September 9), in which Ira Brand seeks to engage with decline and death, and Chronicles Of A Memory Foretold on Wednesday (September 10), a darkly comic play about forgetting, interspersed with lectures and audience experiments.

Flatpack are also involved in the festival, presenting Things That Go Pop at the Birmingham and Midland Institute on Saturday (September 6) – an evening of film, experiments and talks inspired by 18th-century chemist Joseph Priestley.  Included is a special performance combining optical light play and the rich tone of analogue circuits.

There’s plenty of great visual art opening this week, too.  A new season begins at the Ikon on Wednesday (September 10), taking in Lee Bul’s intricate, intelligent critiques of utopian ideals and a revisiting of Yinka Shonibare’s subversive textile work Five Under Garments And Much More.  And to coincide with the unveiling of Gillian Wearing’s A Real Birmingham Family sculpture at the Library of Birmingham, Ikon will be showing her 1994 film Dancing In Peckham in their disused unit in Fletchers Walk.

Also opening on Wednesday (September 10) is Kanaval, a photographic show at Ort Gallery in which Leah Gordon documents Mardi Gras celebrations in Haiti.  Captured by Gordon’s Rolleicord camera are wild performances chronicling the nation’s mythology, history and current affairs, with the pictures accompanied by oral accounts of voodoo rituals and personal experiences. 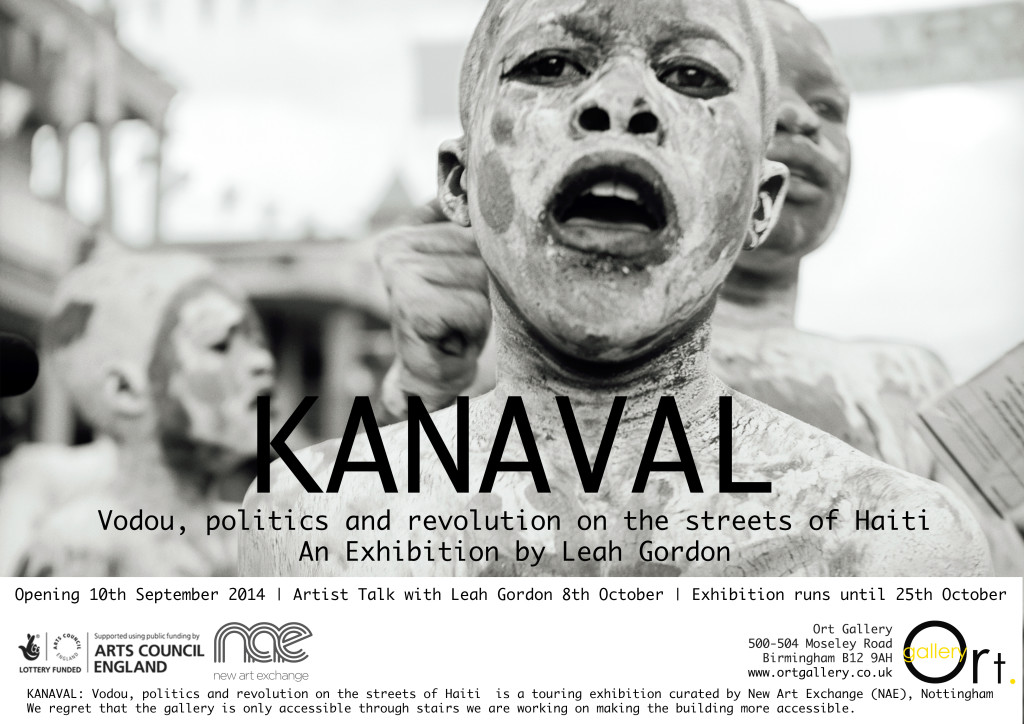 It’s Digbeth First Friday time again, with the treats on offer this Friday (September 5) including the launch of Marcia Farquhar’s irreverent new exhibition Larger Than Life at Grand Union, avant-garde pieces from the Polish pre-war filmmakers Stefan and Franciszka Themerson at Centrala, and an immersive audiovisual performance from experimental duo Giant Axe Field at Eastside Projects.

And Birmingham’s contribution to Scalarama, the UK’s annual celebration of cinema, begins on Friday (September 5), with the Mac’s Sundown Cinema showing Philip Kaufman’s 70s sci-fi classic Invasion Of The Body Snatchers, with themed food and drinks and a best-dressed competition.