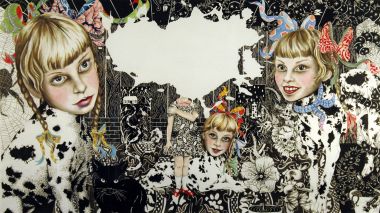 It’s all go at the Wolverhampton Art Gallery this week, with no less than four new exhibitions opening on Saturday (November 16).  Forming part of Meadow Arts’ Shakti initiative, Nikhil Chopra’s mixed-media work explores the relationship between Britain and the Indian subcontinent, while Dean Kelland’s specially-commissioned film No Hiding Place looks at stereotypical attitudes surrounding masculinity.  Meanwhile, SHAD-OW displays mysterious monochrome works from Ann Wilkinson and Anne Guest, while From Darkroom To Digital looks back at Wolverhampton photography from the 1850s to the present day.

Continue east from Bilston to the New Art Gallery Walsall, which also has new offerings from Saturday (November 16). Back To Front celebrates the 40th anniversary of the gallery’s Garman Ryan Collection, with 40 new works to be added to the repertoire over the coming year.  There’s also a retrospective of the renowned printmakers Dorothea Wight and Marc Balakjian – Floor 2 showcases the pair’s own work, while Floor 1 has pieces from their Studio Prints workshop.

Warwick Arts Centre’s The World Turned Upside Down exhibition continues apace.  This weekend, the venue hosts a special tie-in programme entitled Fail Better – Deconstructing Buster Keaton.  On Saturday (November 16), Buster Keaton And The Logic Of Objects is a series of talks and presentations examining the silent-film great’s influence on present-day creativity.  The Evening of Performances that follows features three artists inspired by the Great Stone Face – including a piano recital from William Hunt, with both the performer and the instrument suspended from the ceiling.  The weekend concludes on Sunday (November 17) with screenings of Keaton’s films The Railrodder and The Plank.

As ever, the Warwick Arts Centre has inspirational theatre this week too.  On Monday (November 18), The Bullet And The Bass Trombone blends music and drama to tell the story of an orchestra who are split up while escaping from the scene of a military coup, while from Tuesday (November 19), it’s Dawn King’s spy thriller Ciphers. 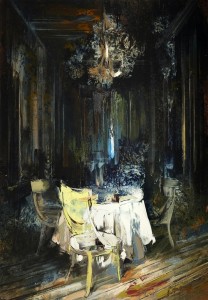 Also in Brum this week, the Custard Factory’s Lakeside Theatre plays host to Voices Of The Holocaust on Thursday (November 14), two tales to mark the 70th anniversary of the Warsaw Ghetto Uprising, while on Wednesday (November 20), the Mac presents Hannah Silva’s experimental exposition of psychological torment The Disappearance Of Sadie Jones.