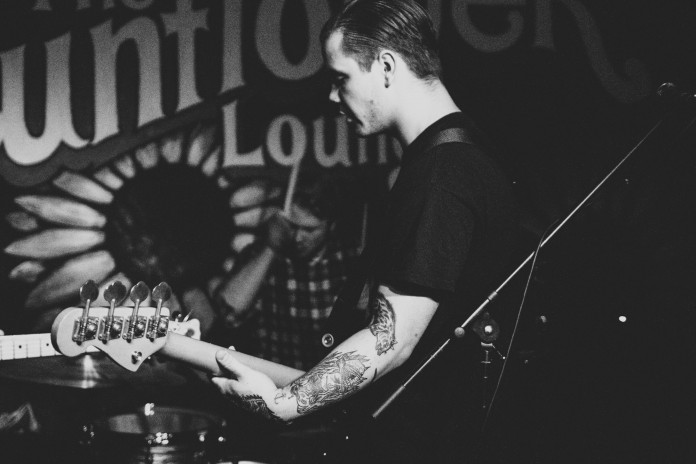 Adore’s music and stage persona go hand in hand – theirs is one which builds an entire performance around the Jekyll and Hyde duality of their sound. Moments of sensitive, deft guitar work is punctured by ripping, sub-octave bass melodies, whilst drums are locked into both, at times playing fill-for-fill. It feels like everyone’s holding back a little tonight, as though it could tip over into something pretty far out if it was allowed to. Songs like Show Horse and Hot Samba really capture the temperament of Adore and demonstrate that there’s room to grow off the back of this.

Elephantine are probably one of the most exciting bands in Birmingham right now. Vocalist/bassist Anna Palmer embodies the eccentricity of KatieJane Garside whilst displaying the virtuosity of Natasha Khan, all tied up with a fuzzy, slacker feel. Don’t be fooled by the grungy vibe though, this band are tight and can mislead the listener in an instant. A sensational version of Abreast features former Elephantine guitarist and Youth Man frontwoman Kaila Whyte on vocals, with their set culminating in the wild and addictive Blame.

It’s been around five months since Youth Man’s last Birmingham date. Since then they’ve toured pretty extensively around the UK and released a music video – and tonight it shows. Guitar and drums are full of nuances in tone and drive that until now is unheard of, and these subtle additions are an affirmation that Youth Man are continuing to work hard to develop and extend their sound.

All this inevitably re-energises songs from their repertoire, with Salt and Inshallah in particular seeming sludgier and more dynamic than ever. New song Joy builds on the tender and frenetic sound the band has crafted, and it’s surely one to keep an ear out for. With an extended intro and building bassline that delicately hints at what’s to come, Youth Man crank out their signature Heavy Rain to end. It’s an impressive set and is a clear indication of what we can expect from the band over the next few months.