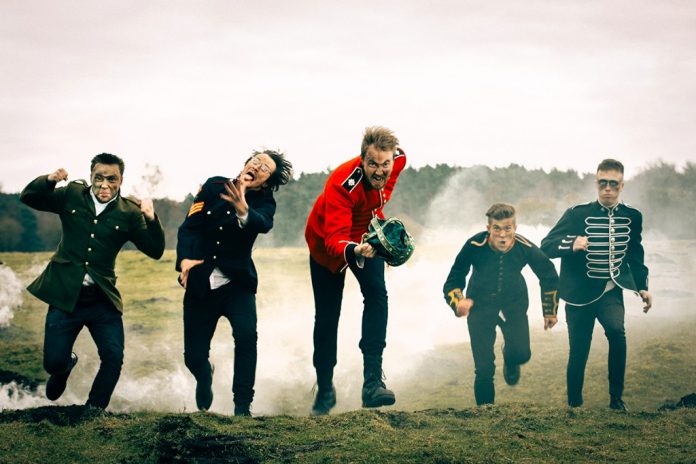 They’re often described as ‘wacky’, but there’s a power and force behind WorldService Project that can’t be easily dismissed as humour.

The well-travelled quintet, who’ve toured across the East Coast of America, Europe and even China, make a long-delayed Jazzlines appearance at The Hare And Hounds on 5 May 2016.

Morecroft, who also runs border-crossing collaborative festivals and tours under the Match&Fuse banner, takes the questions. 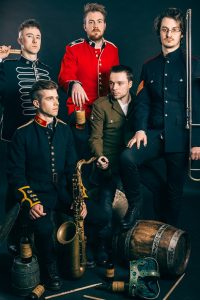 For King And Country (FKAC) opens with the six minute Flick The Beanstalk, which is absolutely epic! How did that track come about?

With Flick, I initially was inspired to create something quite humorous for the main ‘folk-like’ melody, which was reminiscent of a fairy tale (a la Jack and the Beanstalk – also my sister’s nickname at college was Flick, and anyone with an overactive imagination I’m sure can work out the song’s third meaning….). This melody was put through the ‘WSP mincing machine’, and came out the other side with very dark and epic tones. A lot of the tune is based on a compositional cell of six notes found in the last bar of both the ‘anthemic/ sung’ sections and the folk melody, with chords built on and around this theme.

I’ve always been fascinated with the grey areas between humour and darkness, and suddenly shifting from one to the other. I also wanted to create something with a relentless structure that is both intense in gesture section by section, but also almost exhausting as an overall structure! The end of the tune is again built on those six notes found in the main melody, re-harmonised and thrown about in a relentless fashion – with pure passion and intensity. It is music to bring about the end of the world, if that is a grandiose statement enough for you?!

You’ve described your sound as ‘punk-jazz’ in attitude, can you say a bit more about this idea?

I think the ‘punk’ is more about the ‘do-or-die’ attitude towards the music, and also perhaps with a tinge of anti-establishment. WorldService Project is an intense and loud live show; we really throw ourselves into it. Also in a way we’re questioning this ‘J’ word problem that seems to come up all the time in the scene – ‘Is this jazz?’, ‘What is jazz? etc etc … is such a boring conversation now, especially by establishment individuals who feel the need to define and ring-fence everything they see. I personally don’t care if people think it’s jazz, punk, punk-jazz or jazz-punk!

How do you see For King And Country compare to 2012’s Fire In A Pet Shop? Does it continue the same journey, or would you say it’s a significant step up?

I think the sound is definitely more mature, and for sure my compositional ideas are a little more succinct/ simpler. FKAC is also a very gestural record – we really wanted to craft songs that had a purpose; that there was no section that wasn’t justified in some way. This goes for improvisations too; if there are ‘solos’ they are there for a reason, or a lot of the time it isn’t clear which parts are improvised and which aren’t. FKAC is also a bit heavier I suppose and more ‘out and out rock’ at times, which Fire In A Pet Shop hinted at on some tracks, but held back from on others. And of course there are more vocals, post production and effects, particularly on the horns on FKAC – which is great fun to re-create live.

Arthur and Harry both joined last spring and it was a crazy year to be honest – as soon as they joined we had postponed the recording of the album (due to Conor and Liam leaving) so we had to rehearse like mad to get the material ready, and then we headed off to China last October. This was funny as it meant the first live gig we played as the five of us was Guangzhou, and the second an insane festival in Shunde in front of 3000 people! I took the new lads aside after that gig just to quietly remind them that not all the gigs were going to be like that….

How was the experience of playing China?

We played an 11 date tour in October/ November 2015, which was our first visit to the country, and we are returning again this autumn 2016!

China was a rollercoaster ride, but incredible overall. I got a festival invite for the band in Shenzhen and then essentially built the tour up around that with the help of an Italian colleague/ bass player who had toured there a few times. We played a huge variety of gigs, from huge festivals to ‘live houses’ (rock style venues) and a couple of jazz clubs. It was almost impossible to get an overall ‘feel’ of the scene/place as it is so huge and so so so many people! And to be honest we didn’t meet many local musicians. However, you get a sense that China is ‘opening up’ a bit more, with a new, younger audience excited about going to see live music across the country. I know that countries like Denmark and France have already set up lots of initiatives to get bands touring over there, so we (the UK) need to not get left behind!

We didn’t play The Hare and Hounds in the end! We were getting into the cars to drive up from London and I received a call from [Jazzlines promoter] Tony Dudley-Evans saying there had been a fire at [the venue] meaning the gig was cancelled! To be honest, Birmingham is not a city we have had massive exposure in, so we’re very much looking forward to coming up in May.

What are WorldService Project’s plans for the coming months/ year ahead?

We have around 12 gigs on this UK tour for the new album, then we’re going to head to Italy, and I hope France, Germany and Switzerland in September. China is confirmed now for the autumn and there are many other exciting plans ahead for 2017 and beyond!

Alongside Match&Fuse in London during October 2015, you also ran a ‘mini fest’ in Toulouse, France. How was the festival received, and how are plans going for the full edition, later this year?

Toulouse 2016 is coming along well, we’re going to be announcing some programme news at Jazzahead (jazz conference in Germany) at the end April. We’re also planning a London festival for the end of October. Last year was great in Toulouse, we have great partners there who worked very hard and booked an incredible venue (part squat/part artist collective/part club). We also managed to take UK group Snorkel out there, and this year there will be at least three UK acts so keep eyes peeled…!

Any more plans for Match&Fuse …?

Yes. We’re waiting on funds and confirmation of certain things, but 2017 MIGHT well be the first year we produce three festivals in three separate cities, including a country we’ve never been to before…

WordService Project play The Hare and Hounds, Kings Heath, Birmingham on 5 May 2016. Tickets £12 via: www.thsh.co.uk/event/worldservice-project/

For King And Country is released on 29 April 2016 via RareNoise.
www.worldserviceproject.co.uk