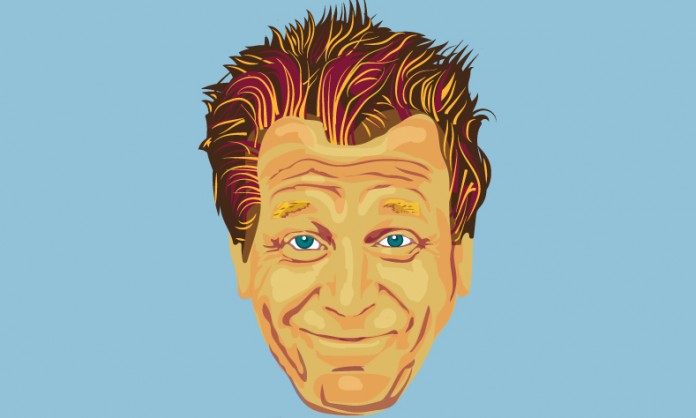 It’s the end of January, and the day of Tony Law’s first show of the year. The comedian is relaxing, walking his dog, but confesses he’s itching to get back on stage.

“I haven’t been doing much, I’ve not really done any gigs since last year, so I’m keen to get in there,” he says enthusiastically, adding he’s not been idle during his down time, having immersed himself in writing.

“It’s general writing, no real structure, just pieces, to keep things chaotic, fresh. I’ve been trying that Bowie thing he did, cutting up, doing material like that,” Law says, referring to the technique much-loved by beat writer William S. Burroughs in the 1950s-60s, and later embraced by David Bowie during the 1970s, whereby lines or blocks of text are cut up and reordered in new and unexpected ways.

“I’ve been cutting up lines and putting them under seats, on the walls, around the room, and just wandering around. It’s interesting … it’s quite exciting, it’s a new thing for me,” he says, though quickly explains that in a live situation, he has well-rehearsed segments to call on if the cut-up stuff fails to cut it. “I do have material on the back burner, just in case.”

Of the technique, which is also reportedly been favoured by Radiohead’s Thom Yorke, he says: “I knew about it in songwriting, but I’d not heard about it before for comedy. In songwriting, you can use it for the lyrics, but you’ve always got the music to fall back on – in comedy, you only have the words, there’s nothing else, no music, to help you convey the meaning.”

Speaking of words, Law’s new show is titled Frillemorphesis, a made-up word that reflects both his interest in nonsense and the absurd, and the idea of metamorphosis, of change.

“The show develops as it goes along,” he says. “All shows are never really finished, all my shows have been a constant development – but then you have a core of good stuff that you want to keep.

“But this time I’ve been embracing [the idea of change] even more – be braver! If you can stick with it, it can be magical.”

He reckons around 70% of any one show will be structured, and the rest new material and material based on chance.

“By the end of the run, I’ll have a new show, written on the hoof, which I can take up to Edinburgh … and win loads of awards with, and then,” he laughs, “… I can retire rich in five years’ time.”