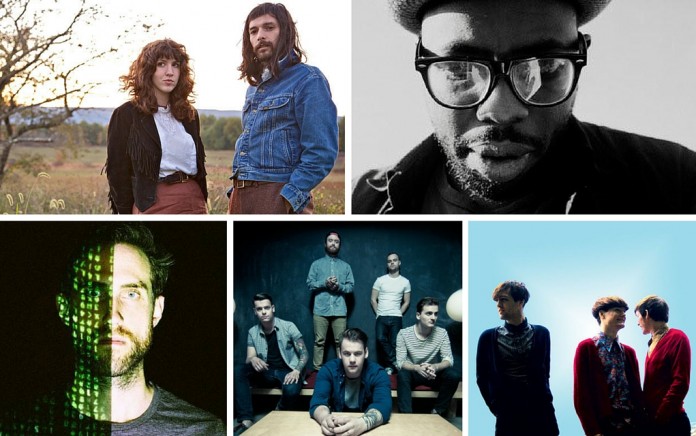 Start your week off in eerie style with some haunting psychedelia courtesy of Brooklyn duo Widowspeak. Touring the UK on the back of the release of All Yours, their third – and arguably finest – album so far, this will be one dream pop adventure worth waking up for.

Top pick on a bumper Tuesday of gigs, Ghostpoet brings his understated her uplifting brand of lyrical wizardry. With his third album, the Mercury-nominated Shedding Skin, he has shown a new, multi-layered facet to his already textured sound, which should make for a fascinating live show.

Darkly comic tales of protest from rebel folk singer Beans on Toast, as he turns his acerbic wit to everything from drugs to supermarkets.

Expect soothing acoustic sounds through to gutwrenchingly raw tales of love and heartbreak from an increasingly accomplished performer. An intimate setting for a captivating vocalist.

Ever fancied playing your part in making an album? Well, now’s your chance, sort of. Beardyman takes audience participation to a new level as he uses crowd suggestions to make an album in an hour, in his aptly named One Album Per Hour show. Part comedy, part microphone black magic, part dancefloor busting beats, this is beatboxing at its engaging best.

Dark, experimental jazz inspired the doom metal of the likes of SunO))). An eclectic lineup of percussion, electronics and bass, the band is joined by acclaimed vocalist and composer Maja Ratkje, a mainstay of the adventurous Norwegian improv scene. Led by Chris Mapp,
THSH Jazzlines Fellow, Gonimoblast first formed for an event run by Birmingham electronic music promoters SOUNDkitchen in 2013, making for one of the city’s most uniquely adventurous acts.

Londoners Hatcham Social are now three albums in and bring their sophisticated blend of angular alt-pop and layered indie to Birmingham, showcasing material from their latest LP, the psych and post punk tinged The Birthday of the World.

What started off as a solo side project for former Attack! Attack! Caleb Schomo quickly escalated into something all-encompassing. Furious and complex metalcore blended with the most brutal side of punk and slamming out anthemic choruses.

Area 11 are a self-styled ‘Gaijin Rock’ band, drawing influence from computer game culture, anime and Japanese J-rock. Intrigued? Find it now it translates to the live stage at The Institute.