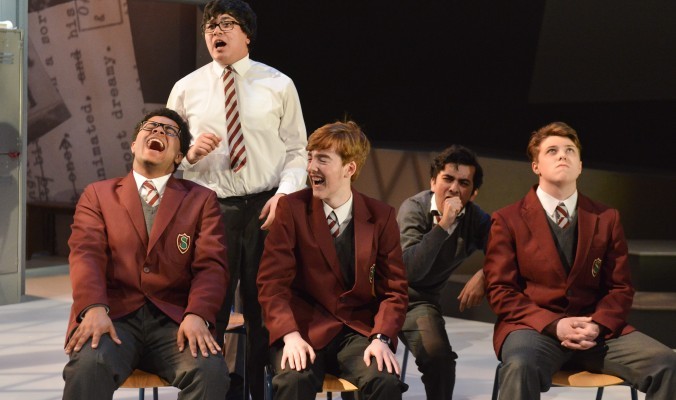 Birmingham Repertory Theatre, together with the Young Rep, presents this adaptation of Jonathan Coe’s highly-acclaimed, Birmingham-based, semi-autobiographical novel with commendable élan, wit and rebellious charm. This vibrant and talented teenage ensemble manage with heroic retro indulgence to embrace 70s teenage innocence with conviction and vulnerable sincerity. Theirs is a canny ability to imagine themselves in an age where social networking was having enough 2ps for the public telephone, feeling chic wearing a quartz digital watch and contriving obscene messages with upside-down numerals on your Texas calculator.

The part-souvenir, part-70s Jackie magazine/scrapbook-style programme provides a valuable sociohistorical snapshot of events that impact on the characters in the play. Industrial unrest, IRA mainland bombing and, for the misty-eyed dads, a primary colour-splashed gatefold exposition marking the rise (and then merciful fall) of prog rock and the spit ’n safety-pin nihilism of punk. All this to deal with, alongside school, hormones, embarrassing parents and no backup Betamax in case you missed Joanna Lumley in The New Avengers.

At 400 pages, transcribing novel to stage presents formidable challenges. Richard Cameron’s conceit is as elegant as it is simple, and the clue is in the title – the Young Rep. Cameron’s mechanism is to eschew all adult characters – adventurous to say the least. Dialogues are inferred through reported speech – diaries read aloud, tape-recorded interviews and other ingenious devices.

The interweaving narrative structures and shifting time periods are engagingly subsumed into the stage action by the use of back-screen projections. Letters, diary entries, lesson texts, even tickets for Barbarella’s. Dramatic news events are juxtaposed with intimate jottings, not least Ben Trotter’s cringing, kissy-heart ode to Cicely.

Michael Holt’s stage design remains sparse and static, a series of irregularly-angled steps set centre stage creates a mood of austere isolation. This works perfectly as an internal metaphor for Lois’ silent trauma as each and every Saturday Ben (played by the engaging Charlie Mills) unfolds his thoughts as they walk along the Lickey Hills.

Not surprising, then, that they also provide the ideal platform for the sneering precocity of Sean Harding’s froth-ranting alter ego Arthur Pusey-Hamilton, MBE (played by a disturbingly assured Haris Myers).

Other accomplished performances, nurtured by director Gwenda Hughes, include the seemingly-incongruous pairing of Jasmin Melissa Hylton and Anna Bradley as sisters Miriam and Claire Newman. Hilton’s love-struck, doomed Miriam is countered by the younger Claire’s fascination but growing unease with her sister’s affair with a much-older man. Claire develops an increasingly-assured insight after Miriam’s sudden disappearance. Her role play during her father’s violent interrogation is compelling. Humour is well to the fore, as when Benjamin, with no swimming kit, faces the pubescent poolside nightmare of having to do the lesson in the buff.  His Damascene conversion to God begins with a deus-ex-machina tableau of a grubby towel and trunks delivering him from evil. A memorable and mischievous mix of the absurd and the sublime.

As this production runs, many families await a coroner’s imminent decision as to whether a new inquiry should be held into the 1974 Birmingham pub bombings. Anticipation is palpable as Malcolm (Daniel Carter) prepares to propose to Lois (Alice McGowan) in the Tavern In The Town. Time stops and characters fade in a haunting dumb show worthy of any Webster tragedy, the audience absorbed in the enormity of the unexpected silence. This was perfectly pitched, its poignancy absolute. Grab the last remaining tickets whilst you can – flares and polo necks optional.

The Rotters’ Club runs at the Rep until April 9. For more information, visit www.birmingham-rep.co.uk/event/the-rotters-club/.