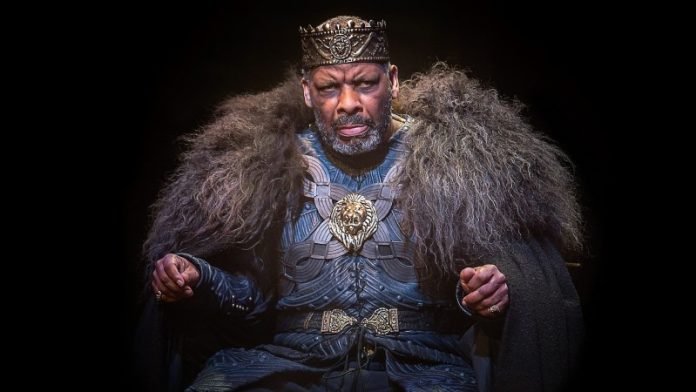 John Kennedy casts his eye over this latest production of Shakespeare’s tragedy.

Four ancient weathered pillars of compacted masonry form the backdrop to designer Signe Beckmann’s austere set. A winding stage of descending concentric-circle steps spills towards the auditorium. Perhaps an apt metaphor for the ensuing spiral of mayhem, a subliminal granite snake that both uncoils and constricts, very soon to echo with the sister serpents’ words of false fealty drenched with treacherous venom.

Deep-frequency, brooding registers of discordant sounds slither like silken stiletto knives between the unsuspecting ribs of the psyche. The Rep’s own ambient contribution is the busy New Street railway tunnels below.

Welcome, then, to director Michael Buffong’s magnificently mad, bad world of King Lear’s ancient Britain, where the nomenclature “Dark Ages” is about to prove itself true in three hours of the devil home on leave, bearing gifts of chaos and horror. Shudder as Lear casts aside his hubristic hollow crown and rests it upon a map of a Britain soon to be defined by rivers and valleys steeped in civil war’s deceit and blood. You can see why Shakespeare hung up his quill and went back to Stratford after this one.

Shaven-headed, taut of skin and leather-bound, the embittered, rasped voice of Edmund (Fraser Ayres, with despicable charisma) celebrates illegitimacy in his soliloquy of corralled rage – a louche lizard of menace basking in the radiance of his Machiavellian conceit redefining what being a complete and utter bastard is really all about. Sisters Goneril and Regan (Rakie Ayola and Debbie Korley) ooze sufficient unctuous piety enough to make Lady Macbeth blush. The casting and characterisation of the otherwise obsequious Oswald, Goneril’s steward, is gifted to the oleaginously fey caprice of Thomas Coombes’ superb interpretation. It is inside the visceral, self-induced dissection of Lear’s soul, in no small part aided by the combined furies of evil unleashed by his vainglorious conceit and hubris, that Don Warrington triumphs. But nonetheless, it is his relationship with the ever-faithful, barb-witted, witheringly pertinent Fool (the masterfully understated Miltos Yerolemou) that consumes the senses. We weep with him as he gently casts his head against the granite-grim walls as Lear yet again condemns himself to more intransigent folly.

It is a wily and daring conceit, casting the banished Kent (Wil Johnson) to assume the guardian-angel anonymous, ninja-like character of Strider from Lord Of The Rings, nuanced with a cocky, wide-boy swagger. Norman Bowman’s statuesque Duke of Cornwall’s tempestuous spirit comes into its own with that scene, wherein the doughty trust of Gloucester is betrayed. Chair-bound, his “vile jelly” ocular outing brings screeches of orgasmic harpy relish from Regan, punctuated by the casual after-flick of mucus membrane from Cornwall’s fingers. It certainly put a stop to the annoying scratch of wooden spoon scrabbling for the last dribble in someone’s ice-cream tub.

Superlatives seem passé when such splendid theatre overwhelms the senses. Within legal boundaries, do whatever it takes to grab the remaining tickets.

King Lear plays at the Rep until May 28. For more information, visit http://www.birmingham-rep.co.uk/event/king-lear/.