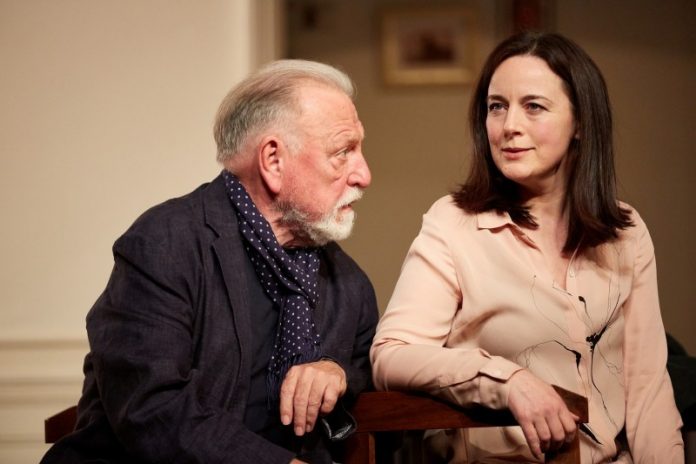 John Kennedy checks out the most-acclaimed new play of the decade.

Written by Florian Zeller, translated from the French by Christopher Hampton, The Father has four remaining performances in Birmingham – or fewer, depending on when you read this short review. 80 minutes (no interval) where you share in the waking nightmare of an apparently-healthy man – mid-70s, most likely – being mentally eviscerated from his self-identity, personality, subjective realities and his daughter’s love through Alzheimer’s disease. Pass? No, don’t – this is contemporary drama of the highest order that thoroughly deserved the opening night’s standing ovation.

Once-successful engineer Andre (Kenneth Cranham) lives in his tidy, well-appointed Parisian apartment. Tidy place, tidy mind. Director James Macdonald and designer Miriam Buether have conspired to incrementally subsume the audience into a parallel surreality where certainties are subtly challenged and expectations become insinuating frustrations. How can you know what you don’t know? When is someone who you thought they were…not? Daughter Anne (Amanda Drew) desperately tries to care for her father – he’d much prefer a visit from his other daughter Elise, the one he likes! But we never see her, and never will. Buether’s set is a rectangular box, as if a shipping container had been framed with tiny Broadway ribbon lights – its sense of compression mirroring the closing walls of Andre’s consciousness, exacerbated by subdued lighting. Scene transitions – and there are many – see total blackout as a Bach piano sonata is played. But there are increasing disconcerting scratches and loop distortions, suggesting the synaptic fractures in Andre’s brain. He is confused as to whom Anne is now married to – and hadn’t she moved to London? As with Dalí’s melting clocks, Time is the malevolent demon that preys on his desperate grasp on normality, his soul slipping through the cracks as the disease tears through his brain. The crippled logic of his argument as to why he finds his supposedly-stolen watch is that whoever stole it put it back where he’d hidden it. After each scene transition, another certainty becomes ambiguous. What seemed corporeal has melted.

A masterpiece of understated power, this play is revelatory in its humanity, humble in its honesty and exquisite in its quixotic economy of form. Kenneth Cranham and cast are outstanding. Like King Lear, Andre is at the mercy of a howling storm only he can hear, his only succour to play his own Fool as a foil to his impending madness. What is identity? Where lies the ghost in this mortal machine? This play sets the bar extremely high indeed. A contemporary classic.

The Father runs at the Rep until May 7. For more information, visit http://www.birmingham-rep.co.uk/event/the-father/.