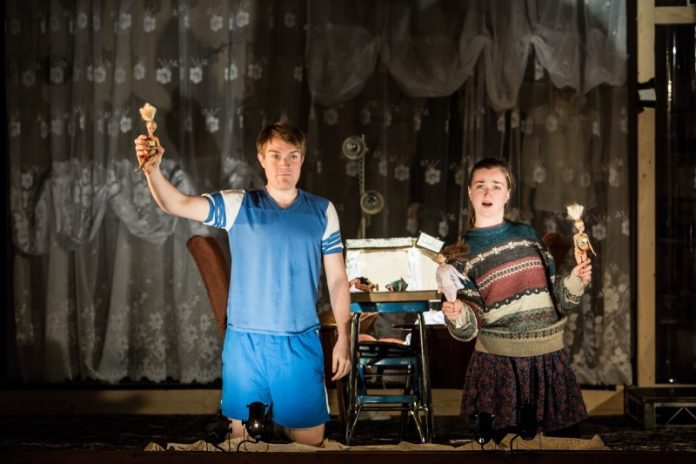 John Kennedy calls in on a 20th-anniversary production of Enda Walsh’s acclaimed play.

A paisley-patterned bedsheet sporting a spray-can “Disco Pigs” banner provides an opening slapstick shadow-figure tableau of our protagonists’ births. When removed, it reveals a tacky interior décor, setting the scene in 70s retro-tech territory. A Sacred Heart portrait looks over them.

Titular siblings Pig and Runt were born seconds apart. Their childhood pet names, we soon learn, feed into and sustain their fractured parallel alter egos. Now it is the evening of their 17th birthdays, and they aim to run drink-and-disco feral. They speak in a frenetic mongrel patois of expletive-laden Cork vernacular, juxtaposed with toddler-inflected doggerel. It often makes for difficult comprehension.

Simultaneously pitiful, pathetic and viciously repellent, theirs is a cocooned womb of desperate and disparate self-preservation. We might well intuit an abusive childhood. At times agonisingly innocent, in a moment’s turn they become schizophrenic, poisoned cherubs where, on the part of Pig (Ciarán Owens), his festering sexual tensions can only find focus on Amy Malloy’s Runt. The simmering of inferred incestuous antecedents is a brooding, constant presence. Poignant, sometimes-visceral monologues to audience reveal their dreams and inevitable resignation to ruptured, corrupted ambition.

A motif of Christmas tree fairy lights form a large number 17. When lit, they have a cosy, innocent kitsch. When not, they seem a potent cypher of fractured despair resembling grotesque, barbed wire-like sutures that strain to contain their wounded psyches. They bless their guardian angel when managing to wrangle a way into their dancing-dream Shangri-La, the Palace Disco. Runt, transfixed by its faux opulence and transcendent escapism, is oblivious to Pig’s climactic jealousy as she mimes an invitation to dance with a stranger.

Possessed of punch-drunk intensity, Owens and Malloy immerse themselves in their respective roles with near-sacrificial abandon, throwing everything both at each other and the audience with sink-estate nihilism, their grievous bodily charm exploding like pressure-cooker shrapnel. We never learn about their absent parents but there are some suspicious lumps beneath that threadbare carpet.