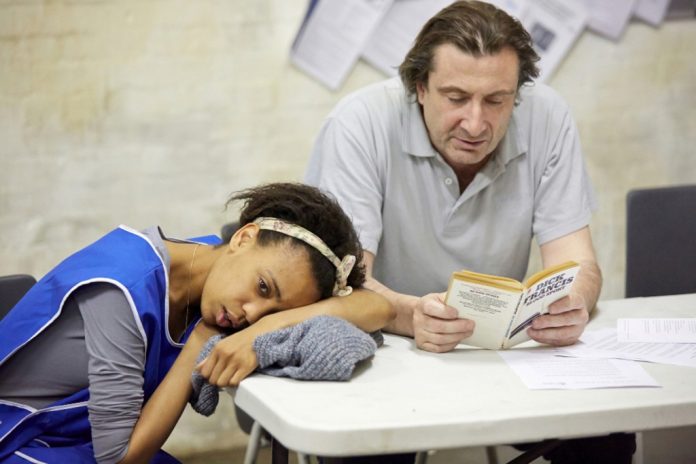 An ingenious antithetical staging dynamic sees the main auditorium turning back on itself – the back stage becomes its own stage. A three-sided U-shaped arrangement of tiered seating accommodates no more than approximately 150 people. The setting serves both as rest room and food-processing shop floor undergoing a deep cleanse prior to refurbishment, its seedy utilitarian monotony emphasised by sallow neon strip lighting.

Three women arrive from their respective agencies. Ian is their supervisor. Grace is shy, self-conscious and anxious that her need for a medication break won’t prejudice her employment. We assume she has been deemed suitable for work after her disability benefits have been withdrawn. The older Susan is mouse-like, nervous, uncertain and distracted, her timidity compensated by gestured smiles. Liverpudlian youngster Becky has an internalised anger that we suspect will provide the catalyst for later conflict.

The debilitating tedium and demoralizing process of being directed to menial tasks becomes incrementally dehumanizing. That they are in the process of updating a sausage factory is an irony they have neither time nor energy to reflect on. Phil, immersed in his escapist world of Dick Francis novels, has gained the laudatory position of a full-time contract, though increasingly compromised by his extended toilet breaks. Monotony, boredom, humiliation and a constant sense of uncertainty haunts these disparate characters – their no-contract, zero-hours shifts, often nights, seemingly at the whim and caprice of both Ian and anonymous overseer Richard.

There are moments of grim gallows humour, as when Ian subjects Susan to an assessment/evaluation interview. She is at a loss to map out her professional-development prospects based on mopping floors and emptying bins. This after Becky has told them they won’t be paid until the following Tuesday. “Take it up with the agency!,” dismisses Ian.

As the days progress, each scoured and scrubbed surface becomes a metaphor for the flaying of their collective spirit. One time, Ian intrudes on their coveted rest break to expound on his unctuous journey to superior spiritual enlightenment and masculine entitlement, oblivious of his hypocritical misogyny. Unsurprising, then, that he’ll catch a quiet moment to watch pornography on his mobile phone and slither off to the staff toilet. Picture the Grey Scrubbers in the kitchens of Titus Groan or Eliot’s The Hollow Men – “Shape without form, shade without colour/Paralysed force, gesture without motion.”

Thankless jobs that exacerbate a sense of self-loathing and impotent subservience? Here is the squalid, dystopian reality of neoliberal economics laid bare. This is uncompromising dramatic realism. A triumph of suffocating banality bearing witness to the world of the invisible class peopled by souls who can only bang their heads in submission against the imprisoning walls of no-benefits dead-end street. Beyond being cared for, they are beyond caring.

Beyond Caring is at the Rep until June 11. For more information, visit http://www.birmingham-rep.co.uk/event/beyond-caring/.