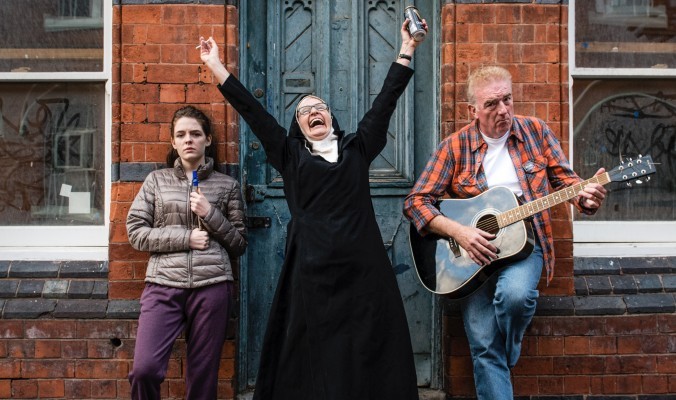 Following the glittering successes of The Kitchen Sink and Jumpers For Goalposts, playwright Tom Wells is currently one of theatre’s hottest properties. His latest play premieres this week in Birmingham, the latest offering from the Rep’s outstanding springtime season. John Kennedy chats to Tom about Folk.

Brum Notes had suspicions it might be a ruse. On the surface, Folk is an earnest, biographical dramatisation of ethno/traditional music archivist Cecil Sharp, but in reality it’s a subversive two hours of finger-in-ear, “Hey nonny nonny/Twas once when I met a fair young maiden”, socks-and-sandals proto-hipsters with real-ale leather tankards.

Now then, Tom. On the surface, maybe Folk is an earnest, biographical dramatisation of ethno/traditional music archivist Cecil Sharp – but in reality, it’s a subversive two hours of finger-in-ear “Hey nonny nonny/Twas once when I met a fair young maiden”, socks-and-sandals proto-hipsters with real-ale leather tankards?

Tom Wells: Er, I hope not! [His cackling laughter adding to the already-breaking mobile signal.] It’s about three people who come together to play folk music. [See, now it’s coming!] But they’re much less serious about their folk music than you make it sound! They each just have a story to tell. It is funny, though, I hope!

World premiere at the Rep. Lucky Rep, lucky Birmingham. Tell us all about it.

TW: Well, it’s a couple of things, really. I had worked with Folk’s associate director Tessa Walker and artistic director Roxana Silbert some time ago. I was a writer/member of the Paines Plough/Channel 4 Future Perfect yearlong training scheme. [Tom was also associate playwright at Hull Truck Theatre, co-presenters of this production.] When Tessa moved to the Rep, the exciting prospect of writing a new play was too good to miss.

The character Winnie, a swearing, smoking, Guinness-drinking nun – did Father Jack miss out on his only chance of a feck there?

TW: Well…she’s just a human being who happens to be a nun!

What drew you to these characters with their individual and collective narratives?

TW: I grew up with folk music. As a teenager I went with my dad to céilidhs. My mum did the calling, my sister played the bodhrán. I wanted to write about that world. Maybe [as a genre] it’s quite amateurish, but that doesn’t matter – folk music is there for everybody.

Three very disparate characters drawn together in a common bond, seeking redemption – you’re not a lapsed Catholic still struggling with the mystery of the Holy Trinity, by any chance?

TW: Well, I never thought of it like that! But now you’ve said it, let’s go with it.

Have you been working with Tessa Walker and the cast during rehearsals? Has that impacted on the original script?

TW: Yes, definitely. I’ve tried to be at rehearsals as much as I can be. You can try things out and hopefully improve as you go along, and that’s been lovely. But each one of the cast has brought their own insights, and we try to include those. In the end, you have to trust that their instincts help them know their characters better than you do. Also, it’s a play with quite a lot of music. James Frewer [composer/musical director] has written some original stuff as well as including some interesting folk songs. Hopefully that should make things even better, fingers crossed!

In no more than five words, tell the good people of Birmingham why they really oughtn’t miss this show.

TW: Oh, yes! The actors have had to pick up on that a bit, and that’s an amazing thing to do in the rehearsal process, to become folk musicians. Quite an achievement.

[NB: Duffle-coat wearers do not get into VIP hospitality during the interval.]