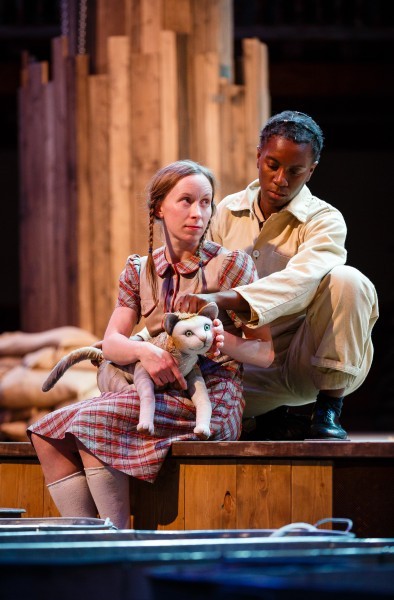 John Kennedy on a feel-good wartime drama from the Kneehigh company, based on a novel by Michael Morpurgo.

This writer’s 91-years-young aunt can recall vividly in 1941 the sisters at her Glasgow convent school breaking the news that the Bismarck had been sunk, and they must kneel down and pray for all the lost sailors. The moment she was 21, she joined the Wrens. Some months later, the family learned that her older brother, one of the first crack commandos, had been shot and blinded deep inside the Burmese jungle. Not long after, her eldest brother was invalided from the RAF as a Lancaster navigator. Wryly commenting that he may well have aimed directly at his German grandfather, his nephew remarked that that was most unlikely as he was taken prisoner after the siege of Leningrad and didn’t return from Russia until several years after the war. Whatever they say, war is always personal.

It is this that Michael Morpurgo’s narrative craft and instinctive empathy bring to his storytelling, conveying the monstrosities of war through the eyes of those inextricably drawn in. An innocence least able to comprehend, let alone believe they might survive it. His signature focus on human-and-animal relationships, loyalties and trauma is never mawkish or sentimental, no condescending Disney-fied anthropomorphic superficiality or sentimentality.

946: The Amazing Story Of Adolphus Tips brings a tragic context to everything we thought we knew about prior to the D-Day landings. The music, puppetry and Kneehigh’s unique brand of craziness fit perfectly in this interpretation of a tale of war, prejudice and love. At once tender, political and romantic, this production speaks to all ages, revealing the secrets the US and British governments supressed for many years. The previous year had seen the disastrous raid on Dieppe, a bloody and still-controversial pre-D-Day exercise. Slapton Sands was about to be the scene of another.

946: The Amazing Story Of Adolphus Tips runs at the Birmingham Rep until October 15. For more information, visit http://www.birmingham-rep.co.uk/event/946-the-amazing-story-of-adolphus-tips/.