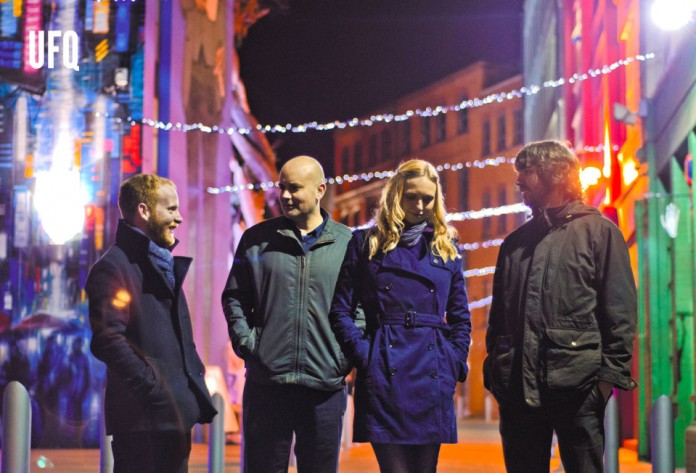 The Urban Folk Quartet’s mash-up of Celtic and folk traditions with more eclectic and contemporary sounds is a direct product of the Brum’s vast and varied make-up.

“Birmingham is our home and the band sounds the way it does because we’ve lived in this melting pot for so many years,” confirms co-founder and percussionist Tom Chapman, who is joined by fiddle player and guitarist Joe Broughton, fiddle player Paloma Trigas and BBC Radio 2 Folk Awards 2016 Best Musician nominee Dan Walsh on clawhammer banjo.

The bands’ latest album is The Escape, their sixth. A Telegraph best Of Folk 2015 album, it mixes Celtic vibes with influences that range from Americana, to Middle Eastern, African, Indian and Mediterranean.

Currently on tour (their third in 12 months), the quartet return to the mac Birmingham on 8 April 2016 for a rare home-town appearance – a performance they’ll be recording for a future release (provisionally entitled UFQ Live III).

You recorded your last live album, 2014’s UFQ Live II, in Birmingham, at the now closed (and soon to be demolished) Yardbird. How was that show?

That was a great night. The place was packed as you can probably hear on the record! The Yardbird and its many previous incarnations have been very important to the music scene in Brum for decades. It was particularly important to me as I was a promoter there for a couple of years. It’s sorely missed, but I hear rumours something might be rising from the ashes…

The Yardbird’s a very different venue to the mac – do you think the different ambience will affect the recording?

Maybe. That’s the exciting thing about live recordings – who knows what will happen? What I like about Live II is that it’s definitely a record of two specific nights on a tour. On the other hand, it’s exciting and liberating recording lots of gigs at the moment. By losing the pressure, we might end up with something even more “of the moment” as it becomes so normal you almost forget the tape is rolling at all.

The mac gig is your first in the city since 2014 – is a home-town show a special occasion for you?

Definitely. The theatre at mac is a really lovely room to play in too … and being less than two miles from your bed is very welcome mid-tour!

You often cite Birmingham as a significant influence on the band, something you underline with The Escape track Control Zed which is (to quote the album sleeve) about “doings and undoings with rhythmic nods to Digbeth.” Tell us more …

Digbeth has to be the most vibrant area of Birmingham – just look at the colours of our album art, shot at The Custard Factory for a literal example. I love the area and have a studio space there, right in the hubbub of designers, musicians and artists. I’ve also had some of the best nights of my life in Digbeth. It’s the Irish Quarter and the Creative Quarter, so you’ll find traditional folk music, cutting edge jazz, reggae sound systems, art exhibitions, film-making, warehouse parties, raves… it’s all happening somewhere in Digbeth, quite literally around the clock. To me Control Zed “drops” out of the house beat at the end of [preceding tune] The Getaway into an almost dubstep-like groove underpinning a slightly manic folk tune, before hitting an unaccompanied percussion solo – a journey you could easily find yourself on round here! Although it’s not my melody, I had quite an influence on the arrangement and the name came in a flash. I wanted to poke a bit of fun at some of the more avant-garde band names around in electronic and pop music, so I named it after a keyboard shortcut – one that sums up that edge-of the seat feeling – Undo! Undo!