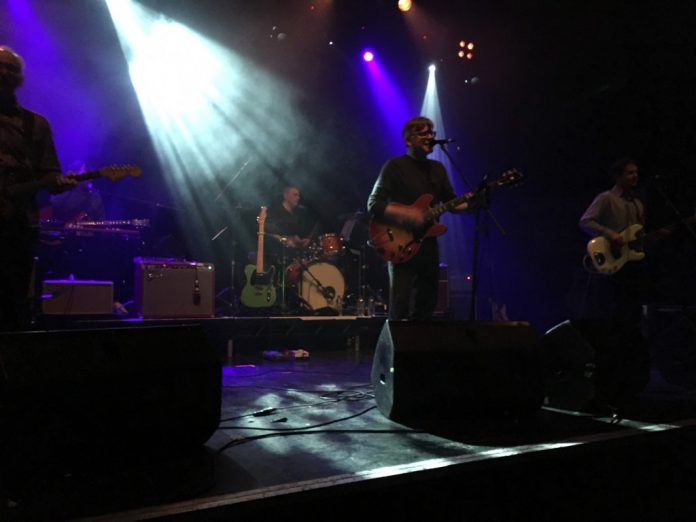 Returning after a six-year absence with one of their finest records, the Scottish melody merchants made a triumphant return to Birmingham with a career-spanning set. Sam Lambeth wears denim, wherever he goes…

Support band Spinning Coin might not listen to music (according to their singer), but their sound is rich with influences – alongside the obvious nods to Teenage Fanclub’s muscular, melodic rock, the southern-fried fuzz of Band of Horses and the warped indie edge of Built to Spill also creeps into view.

“This is from our album Man Made, which was released a few…decades ago,” drolly remarks Teenage Fanclub‘s Norman Blake; he’s wrong, of course, but it’s an apposite remark – the five-piece’s recording output is, to put it mildly, leisurely, but it has helped reap more significant rewards. Their latest album, Here, not only rightly returned them to the top ten, but is also their strongest, most accomplished work for over ten years, and unsurprisingly the songs cribbed from Here go down a storm. ‘Thin Air’, led by bassist Gerard Love, keeps the four-stringer’s devotion to fizzy power pop in check, comprising of chunky riffwork and their trademark Hurculean harmonies, the Blake-led ‘I’m In Love’ soars and Raymond McGinley’s ‘Hold On’ is a serene chug.

Opening with the obligatory barnstormer ‘Start Again’, the band delve deep into their back catalogue for some buried treasure – the galloping guitar thrust of Love’s ‘Take the Long Way Round’ is matched with the melancholic hymn of McGinley’s ‘My Uptight Life’, while the band’s influential, sterling vocal work is perfectly articulated in the ascending ‘Sometimes I Don’t Need To Believe In Anything’ and the fuzzy, forlorn ‘Don’t Look Back’.

The Institute is pretty much sold out, which is more than what the Scotsmen deserve. They also sing back every word, whether it be to the glorious key in change in Blake’s ‘I Don’t Want Control of You’ or McGinley’s Beatles-esque blast of ‘About You’. Things get more serious, though, when the blistering ‘Sparky’s Dream’ careens into the epic ‘The Concept’, which contains some of indie, nay, music’s finest opening lyrics and changes tack from a grungy contemplation to a waltz-esque crescendo. There’s time for more, too, as the jangly distortion of ‘Star Sign’ bleeds into one of alternative rock’s most covered tracks, the introspective ‘Everything Flows’, which sees McGinley show off his dextrous guitar chops.

Throughout the gig, Teenage Fanclub are, like the songs themselves, affable, life-affirming and completely underestimated. See you in six years, boys.