Swim Deep release their hotly anticipated debut album Where the Heaven Are We this Monday, August 5.

To get you in the mood, frontman Austin Williams gives Brum Notes Magazine a track-by-track guide to his band’s first LP.

This forms a bookend to the record with She Changes the Weather. It eases you in and I think it’s a good nod towards what the record’s going to be like.

This is actually one of our oldest songs – it’s one that I wrote when Cav [McCarthy, bass] wasn’t in the band and it marks the start of our chronological journey. I wrote it in my bedroom on this keyboard that my gran gave me – that was when I first started writing songs and I was basically just trying to copy MGMT. After a while I got bored of doing that and that’s when I started writing my own songs.

The name King City isn’t a reference to Birmingham, it’s a place in California and it never occurred to me that it could be interpreted that way. When we started out, we used to look on Wikipedia for places in California and name our songs after them – Orange County, Santa Maria, Isla Vista. When I wrote it, I just wanted to get out, to live a bit more and experience happier things. The whole Jenny Lee Lindberg reference isn’t personal, it’s just a nod to that kind of teenage fantasy. I’m not at all anti-romance – I love romance and anything to do with happiness.

Me and Zach [Robinson, drums] were writing over the phone. I was listening to a lot of hip hop at that point – a lot of Kanye West because he samples loads and I really like sampling. Zach sent through this little loop that he’d just made on the guitar and with the phone to my ear I put some chords over it. That’s what I wanted to do at the time – just make a real feel-good Kanye West song. We wanted to put all of the ‘bangers’ at the start of the record because it’s a statement – it’s saying ‘this is the music we want you to hear first because we want it to hit you hard before taking you some- where more serious’.

This song is older than King City and was written when me and Higgy [Tom, guitar] were listening to a lot of Smashing Pumpkins. It used to be called Pink and is quite an uplifting tune which is actually about Higgy. It means that you have to see stuff in the right light and look at things in the right way.

This used to be called Gold and is so old that I can’t actually remember writing it. The lyrics to the chorus came out immediately and I said to the guys, ‘that’s lame isn’t it?’. But they didn’t think so and when I went home and thought about it, I thought ‘it can’t be lame if you don’t want it to be’. If you really mean it then it isn’t lame, and I do mean it.

I wrote The Sea in a friend’s bedroom. She had this microphone connected to her laptop and I was playing around on the guitar. I always feel like I write the best music when I’m around people but also I feel like I shouldn’t be writing music then because it’s anti-social. She’s got this ringtone on her old phone and I didn’t realise until after the song was released but this was the annoying sound that I made into a nice sound. Sometimes you don’t realise it but you take on influences – I like that string theory idea that vibrations carry on through people even though they don’t know about it. That’s why music comes back and crops up and connects with people in different ways through the generations – when the feeling comes back, the music comes back.

This is the newest song on the album. After the album was recorded, I went into the studio to record a b-side. This is that song and it turns out that we wanted to include it.

It’s very idealistic and almost like I’m talking about someone else. But it’s talking about explaining to a lover that you have all these dreams. It’s quite up itself, but I like that.

11. She Changes the Weather

We wrote it here in Robannas and it was just a jam. We’d been listening to a lot of psyche- delic music and it was the last song we wrote before we went into the studio. There was never meant to be a chorus but we just kept on build- ing it up because we were so happy with it. We might as well have put an orchestra on it – actually, that’s something I want to do live at some point…

Swim Deep release debut album Where the Heaven Are We on August 5, through Chess Club/RCA Victor. It is available to preorder from Amazon here. New single King City is out on now. They are live at the Town Hall, Birmingham, on September 20. Tickets are on sale now from here. See their full UK tour dates here. 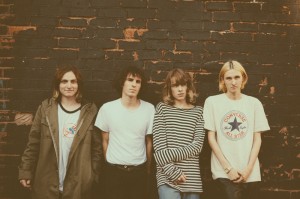