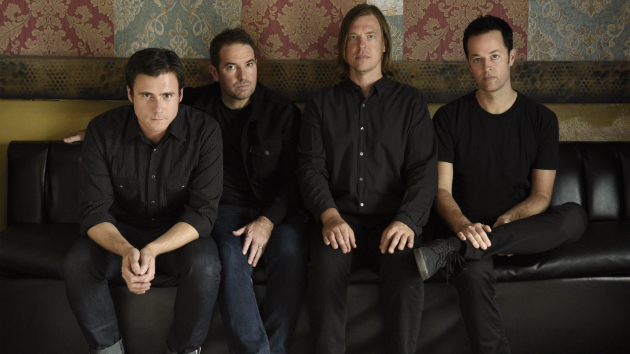 Sometimes, in order to look forward one has to cast their eyes back to the past. Or, confusingly, back to the Futures. For American rock stalwarts Jimmy Eat World, that seems the case on their plaintive comeback, ‘Sure and Certain’.

There’s something refreshingly vintage about the Mesa four-piece’s return; the playful, but scrawny, typeface that adorns their new logo, suggesting a band both renewed with vigour and refreshed with their past. The grainy images that have greeted their two new singles (the other one being the menacing strut of ‘Get Right’) follow suit – a glimpse of youthful uncertainty, of widescreen longing, of venturing into the unknown dusk. Musically, those pangs of emotion have never been articulated so passionately and convincingly as when they’ve been at the hands of Jim Adkins and co.

‘Sure and Certain’ belies its affirmative moniker with a track that’s drenched in the same troubles and confusions that have nourished the group’s best work. With their new album Integrity Blues primed for October, ‘Sure and Certain’ begins with a forlorn chug of scuzzy distortion and Zach Lind’s propulsive drumming as Adkins ponders: “the clever ways I try to change, happen and pass leaving me the same.”

It allows for two intriguing segues, one a hushed embrace of arpeggios and minimal percussion, and another blaze of rhythmic distortion and barnstorming drum work that bleeds into the chorus, where Adkins laments: “lost and lurking, wonder till we’re cold” over Tom Linton’s tense, thick slabs of guitar lashings.

‘Sure and Certain’ offers JEW’s usual blend of hazy longing and unkempt fury in a refreshingly lo-fi sound, mixing Futures‘ urgent emotions with the raw orchestrals of Clarity. Furthermore, it provokes the same feelings of adolescent angst that the band have, thankfully, never left behind.