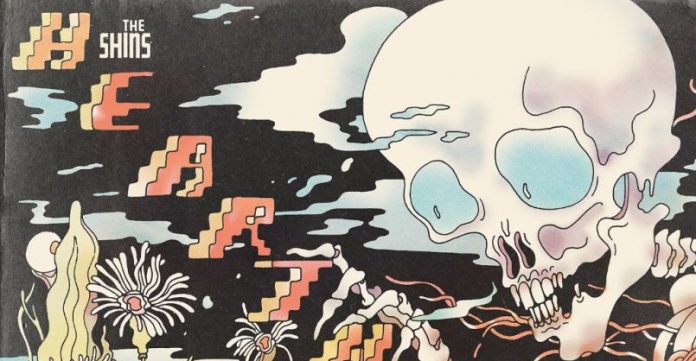 The Shins’ mainstay James Mercer has always had a knack for idiosyncratic melodies, but Heartworms adds a welcome layer of melancholy to his usual frenetic vision. Sam Lambeth investigates.

Since ‘New Slang’ became synonymous with essentially every US indie film made in the noughties, The Shins have had an indefinite currency as one of rock’s delightfully askew statesmen. This is mostly down to their polymath frontman – and sole remaining original member – James Mercer, who weaves in swaths of different bands, old and new, all anchored by his rousing yelp. After the sleek polish of 2012’s Port of Morrow, Heartworms is a return to his indie – and his own – roots, and it certainly lives up to its emotionally-charged title.

Opener ‘Name For You’ has all the usual traits of a Shins song – Mercer’s warm howl, a Beach Boys-indebted slice of sunshine, and an infectious chorus that gallops over sun-kissed guitar chords. Even better is the kaleidoscopic keys of ‘Cherry Hearts’, which changes tack from scant, robotic rhythms to bursts of pounding propulsion.

Throughout Heartworms, there is a lingering sense of nostalgia and wistfulness that adds more weight to Mercer’s mercurial delivery. “Back at school, hitting the fire alarms, desperately wanting attention,” he sighs on the reverb-drenched AOR of ‘Fantasy Island’, while the rain-soaked ruminations of ‘Mildenhall’ ponder a childhood spent watching bands and learning guitar.

However, The Shins are at their best when they allow their individualism to shine through in the form of big-bodied power pop, as well as letting Mercer’s voice – a flailing tenor pitched between Kevin Parker and Ben Bridwell – hit the highs. He does this on the towering, mid-paced majesty of ‘So Now What’, powering mournful synths and a downbeat guitar coda.

‘Half a Million’ takes Fountains of Wayne’s brand of synth-addled, wry rock and bathes it in bruising guitar crunches and Mercer’s self-reflective refrains. For the most part, though, Heartworms is all about the heart – the title track is a floaty acoustic chug, while closing ‘The Fear’ is as grandiose as its title would suggest.

By reconnecting with his past, Mercer has revealed nostalgia is not always a compelling liar. “It’s a means to a terrible end,” he whines at one point. He’s been proven wrong.