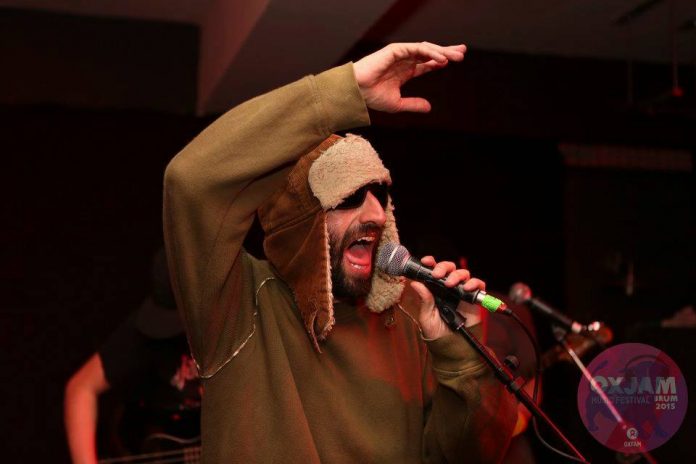 At some point, a philosopher will sit down and analyse the aesthetic of ‘sesh’. They will write down the emotions, the styles and, of course, the aftermath of such a phrase, but can they decipher how, and if, it smells? To get an official olfactory sample, you shouldn’t look any further than Shaun ‘Gambowl’ Walsh.

He admits it himself, but he doesn’t need to; he and his band of merry methheads, The Plagiarists, resemble the long-lost uncles of Sleaford Mods and have a brawny attitude to match. Dressed in trademark cuddly hat, glue-on shades and five-week shadow (strewn with ket crumbs), Walsh is a wily host, but we’ll get to that later.

Before Walsh are a suitably bemused Semantics. Musically, it’s quite a leap and the gig is a test, but they come through it with flying colours (well, black colours, natch). Rob Lilley may have lost his lank locks but he hasn’t had a Samson-like loss of strength; if anything, he seems fitter, happier, beaming broadly and admitting he’s partial to a jalfrezi (Ladbroke’s had bets on his being a bhuna). There isn’t much room for Josh Rochelle-Bates to do his trademark stage invasion (which, in actuality, is a brooding gait that matches his equally menacing basslines), but they still whip up a hell of a lot of charisma through the chiming ‘Another City’, the pounding ‘Games’ and the perversely floor-filling ‘My Detainer’.

The Surrenders are a band again of a different ilk but their brand of power-pop – trebly chords, infectious energy and tumultuous tambourines – whips the crowd into an altogether different frenzy. Their EP was released in the summer and had enough fire, ’60s-inflected infectiousness and, above all, originality, to make them yet another Birmingham band primed for the big leagues.

For Shaun Walsh, aggression and passion aren’t mutually exclusive terms. Returning after his previous sell-out show at Club L’Amour, fans often worry Walsh will mime the much-missed (hmm…) stage antics of GG Allin; it’s only natural, then, that as soon as Walsh wobbles forwards the crowd takes three steps back. While Walsh doesn’t like the presence of the barrier, he breaks down the fourth wall with his usual brand of fiery wit, calling the audience any word in the sun and making sure his Plagiarists are fed enough bravado to plough through their legendary hit ‘Who’s Got the Ket’.

In a world full of square rock stars, we’ll miss Walsh when he’s gone, even if he won’t forget his smell.