Released in 1959, the multi-Oscar nominated Anatomy Of A Murder stars James Stewart as a small-town lawyer defending a man accused of murder. But the case isn’t as straightforward as it seems.

Led by trumpeter Gibbs (Birmingham Jazz Orchestra, Young Pilgrims), the quartet will be playing a set which takes Ellington’s score as inspiration, as Sean explains … 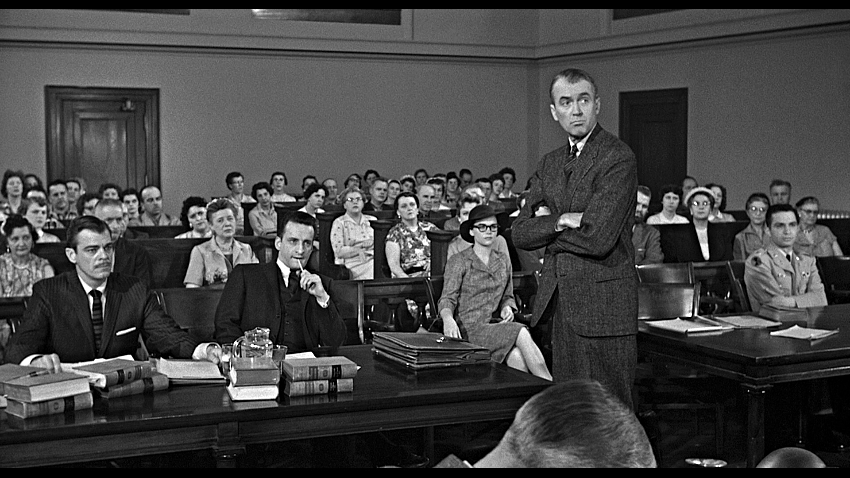 Tell us a bit about the film …

Army lieutenant Frederick Manion is on trial for the murder of Barney Quill, a bartender. He pleads not guilty, claiming that the victim had raped his wife Laura. There is little evidence to support this however, and as the film unfolds we get to see the result of the case.

What did you think?

I enjoyed the many great acting performances, especially from James Stewart in his role as Mainon’s lawyer, Paul Biegler. It’s fascinating to see such a cynical view of America’s judicial system and quite complex characters who have confused morals and rarely mean what they say. Duke Ellington’s score is also of course a big part of the film’s appeal, and he has an excellent cameo appearance!

It’s an iconic, and some would say pioneering, Duke Ellington score, one of the truly great big band/ jazz scores of the era – what makes it so unique?

As with all of Ellington’s writing, he utilizes the strengths of his players brilliantly throughout. These include such great individual voices as Johnny Hodges, Paul Gonsalves and Clark Terry. This sets it apart from many other film scores as we get to hear very distinct personalities come through in the music, unlike when a score is recorded by ‘anonymous’ session musicians.

I don’t think the idea is to compete with it! Playing as a quartet, the music is of course going to sound vastly different anyway. This reduced setting limits the available timbral palette but also increases the flexibility of being able to improvise the direction of the music and create something which is truly in the moment.

What will you be playing?

We will perform a selection of music written by and associated with Duke Ellington. As a trumpet player, I have a particular love of his long term sideman Clark Terry, so will feature a couple of pieces which he popularized too.

As founder of the Birmingham Jazz Orchestra in 2014, you’re clearly a big band fan – are there any other big band or jazz scores you’d recommend people check out?

I must confess I’m no film buff, but a couple of great jazz soundtracks that spring to mind include In The Heat Of The Night by Quincy Jones and Ascenseur Pour L’échafaud [also known as Elevator To The Gallows] by Miles Davis.

Aside from films and specifically in terms of big band music, I’d recommend Duke Ellington, Count Basie and Thad Jones as a starting point. For the more contemporary side of things – Bob Brookmeyer, Maria Schneider and Kenny Wheeler are some of my favourites.

What other projects are you working on at present?

I’ve recently set up a new band, Fervour, which plays original compositions encompassing influences from the jazz tradition alongside the earthy grooves of blues, rock and more. We have recorded some videos live at Flood Studio which will be released in the coming weeks. I continue to direct the Birmingham Jazz Orchestra, providing a platform for the many great jazz composers in the city. I recorded my debut album, Burns, with this band last year, featuring compositions of mine inspired by the poetry of Robert Burns.