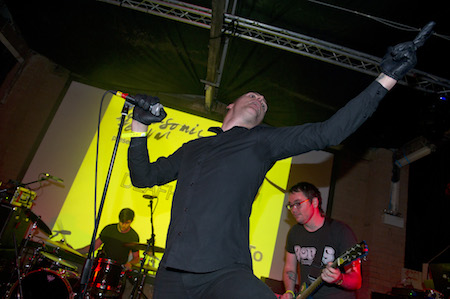 It’s difficult to think of a more fitting way to begin the Bring To Light journey than stepping off the low-lit back streets of Digbeth into the full sonic onslaught from San Francisco black metallers Deafheaven.

The commanding presence of lithe and menacing frontman George Clarke, poised centre-stage at the Rainbow Warehouse on a monitor, delivering searing vocals whilst wielding a mic stand like a pitchfork horizontally over the heads of the crowd, might well have had something to do with it.

It wasn’t just him though. The band’s super-powerful, all-enveloping wall of sound, occasionally dropping to give way to dark chugging guitar or heavy bass and drums only sections, contributed to the making of a discarnate suspension-of-time experience, driven by the Stygian theatrics of Clarke and sheer voluminous material. Fucking incredible.

After such a captivating set, and coming new to Sleaford Mods, when a baseball hat-clad guy with something of a shady vibe about him set up a laptop and started playing looped post-punk and electro instrumentals for a Bez lookalike to shout aggro-punk poetry over, confusion set in temporarily. 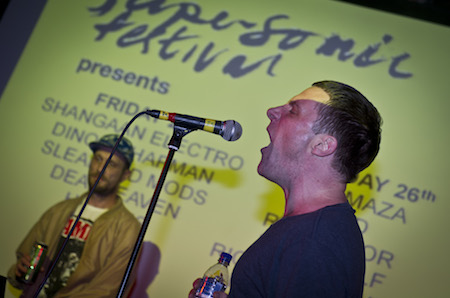 We joked that we were part of some elaborate VICE music video shoot, but the laughs quickly made way for awe. Andrew Fearn and Jason Williamson are like nothing we’d ever seen or heard, a sort of John Cooper-Clarke meets The Streets via Crass. With uncompromising lyrics that tore society, trends, politics and the music industry a new one – “Another local pub burnt down to the ground, I hated those fookin’ Motown nights anyway” and ‘Drop us a fiver mate, no worries – £1.29 on shag all…McFlurries” – the duo got some of the biggest cheers of the night. 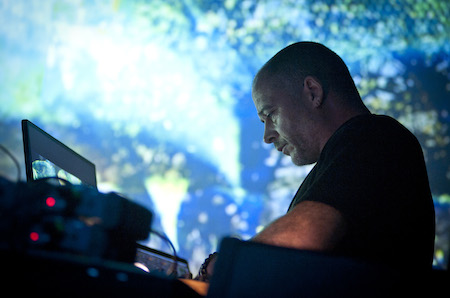 An 80-minute set from Dinos Chapman saw the Turner-nominated artist build layers of deep electronica over striking live visuals, dancing around the periphery of Aphex Twin style ambient and the experimental end of Polysick. Subterranean, glitchy and an immersive but not wholly thrilling, Chapman’s AV offering felt slightly out of place with the flow of the evening. 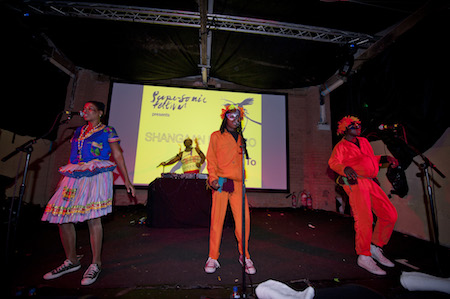 Headliners Shangaan Electro are currently enjoying an increase in their UK profile after a good few years of blowing up South Africa and parts of the US and Europe with their high-speed dance phenomenon based on a fast, hard style of electronica that sounds like Eurotrance with added marimba. Aside from a handful of videos and interviews online, there’s little content out there that could possibly prepare you for the live show. Once creator Nozinga, resplendent in feather headdress, traditional costume and a wide grin, took to the CDJs joined by a troupe of five dancers and singers – two male, three female – and a few call-and-response phrases were established, the semi-industrial Rainbow Warehouse space went TURBO.

What followed was a dizzying rush of 189bpm tracks with live PAs and dance routines that were breathtakingly fast, passing by in a blur of voices and limbs. Nozinga presided over the decks, prompting dancers with whistles and providing background vocals like a Mr Motivator meets Brian Epstein type figure, the group hip-shaking like their lives depended on it and performing repetitive movements like the most crazed, jolting breakdance, tap and jig mashup you could imagine. 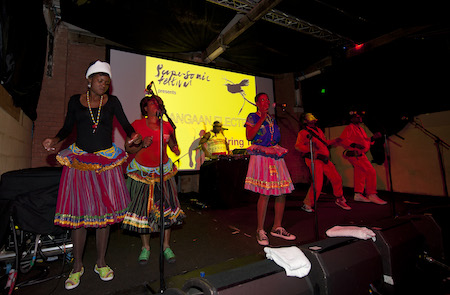 Outside the synchronised numbers, it was difficult to tell what was improvised or not, and doubly impressive was the physical stamina of the boiler-suited male dancers, who gave around an hour’s worth of uninterrupted frenetic moves with jaw-dropping ability.

And what night would be complete with an invitation to dance to a mad beat faster than DnB or happy hardcore, live on stage in front of hundreds of adventurous music fans? Climbing over crash barriers to join a friend and another audience member on stage, this reviewer had just enough time to realise what was going on before the track kicked in and we were moving to an all-consuming beat at what felt like hyperspeed.

The showmanship of Shangaan is outstanding, if a little rough around the edges, but then you try dancing at ‘ONE HUNDRED AND NINETY’ as Nozinga urged us to chant. An exhilarating and unique experience that had metalheads, indie kids and hispters grooving as one.

Over at the Library of Birmingham, with a jovial, shambolic and unapologetic demeanour, Richard Dawson’s mesmerising storytelling over folk and blues guitar work offered a welcome respite from the more polished and rehearsed, though that’s not to do his music a disservice in any way. Delivering wry humour on such subjects as UFOs, his ‘pudgy body’ and flower eating in between numbers, the likeable performer also produced spine-tingling moments around songs with serious subject matter. Stripping down to a white vest and playing snatches of Don’t Stop Believing (about UFOs) before requesting I Will Survive from the sound engineer, Dawson’s charisma pierced the poignancy of heart-rending material all the right moments.

French psychelectronica artist High Wolf cut an unassuming figure on stage in the studio space, building up a pattern of beats, synths and samples via laptop, backed by a mind-bending backdrop of film including footage of tribesmen and indigenous peoples overlaid with kaleidoscopic visuals. The musician – renowned for globe-trotting missions to seek out new sounds and collaborations – armed himself with a Washburn and started to improvise in what sounded like a West African melodic guitar style, only just audible over hypnotic almost Goa-trance like music in which percussive leitmotifs appeared and disappeared.

And rolling in like the storm of St Jude came Robedoor. Producing a deep rumbling, organ-convulsing, head-splitting drone that shook the very foundations of the building, LA’s Britt Brown and Alex Brown played the role of digital alchemists perfectly, laying down huge monolithic aural creations with distortion, fuzz and phase set to 200 per cent. In the low light, the hooded duo looked the part, testing the limits of sound with their murky, doom-laden electronica.

And that was only half of Bring To Light. Supersonic Festival might be on ice for a few months to allow curators Capsule to concentrate on curating and delivering the Discovery Season as part of the Library of Birmingham’s opening programme, but the same expansive approach to presenting exceptionally adventurous music and artists – albeit in a slightly different context and setting – was definitely still apparent. A mind-blowing journey through a sonically fearless landscape, and one we feel much richer for embarking on.