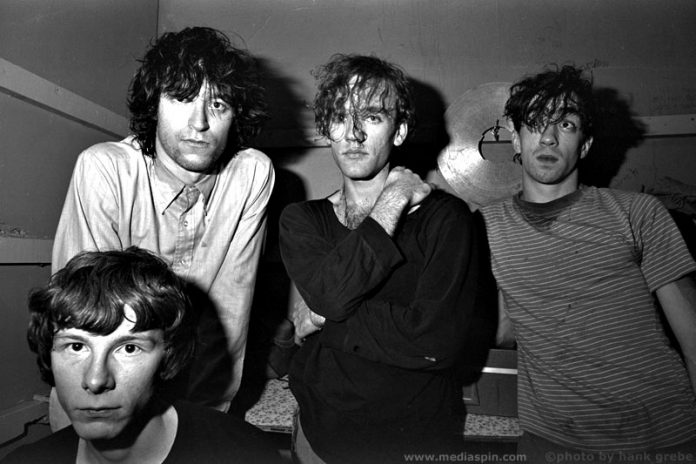 Spark a conversation about innovative outfits, truly great bands, and groups that influenced a raft of modern contemporaries, and the usual responses will crop up. Nirvana? Check. My Bloody Valentine? Yes. The Smiths? Oui. R.E.M.? Get your coat…five years on from their split, what is R.E.M.’s place within the rock pantheon? Are they even in it?

In R.E.M.’s final record, Collapse Into Now, there are two lines that may appear deceptively throwaway, but could serve as a neat representation of the band’s place in the modern world. “I’ll show the kids how to do it fine,” blasts singer Michael Stipe, sounding raging and refreshed, before the song – a glam thrash called ‘All the Best’ – sees Stipe check himself and, tongue violently in cheek, conclude: “it’s just like me to overstay my welcome.”

And here’s where the problem starts – they stuck around. Like The Simpsons and Robert De Niro, R.E.M. were still active in the noughties, but no one had really given a shit about them since about 1998. Nirvana had, of course, imploded upon Kurt Cobain’s tragic suicide, The Smiths bitterly crumbled under Morrissey’s quiff and Smashing Pumpkins warped in the post-grunge sun. R.E.M., rightly or wrongly, carried on, with the overriding feeling that they had become the band your dad raves about when XFM devote a day to ‘oldies’; in fact, their 2008 return-to-form record Accelerate had a distinct marketing campaign surrounding, you guessed it, Father’s Day.

Music is cyclical, and the best bands and the best songs are passed down through the ages. In 2016, such a premise is more potent than ever. A scan through a typical ‘indie’ person’s Facebook will, corner shop cans and Magikarp memes aside, yield YouTube nods to the aforementioned groups, bands that have kept their cool despite changes in trend. But while it’s perfectly plausible to see a 16-year-old post a link to ‘Lithium’, it’s almost incomprehensible that the same demographic would do something similar for ‘Sitting Still’.

There is some evidence R.E.M. have crept into the current conscious (the ominous jangle of ‘Bang and Blame’ featured on My Mad Fat Diary, the political bite of ‘Ignoreland’ touched upon the post-Brexit betrayals), but it’s staggering to think a band Kurt Cobain so publicly praised and emulated have fallen so far down the pecking order; when Nirvana came to record In Utero, Steve Albini simply called them “R.E.M. with a fuzzbox.”

R.E.M. aren’t seen as cool, which can be stemmed from the fact parents adore them and they enjoyed a lengthy period playing arenas, but in truth, they were never cool; that was the point. They were a wardrobe’s nightmare, dressing in baggy knitwear and Nudie suits, bassist Mike Mills resembling a bookish English teacher and Peter Buck scissor-kicking with geeky guitarist glee. They were for the outcasts, the losers and the unloved, and ironically, from the moment a mandolin pricked into life, they became loved themselves.

So why do we need to reappraise R.E.M.? Split their career in two and you’ll find out why. In the 1980s, they were the American Smiths – Buck’s earnest, Byrdsian arpeggios resonated breezily, eschewing distortion and solos and favouring more enigmatic melodies. Mills punctuated each song with Herculean harmonies, while Stipe mumbled incoherently about political unrest and social dissatisfaction. Like Johnny Marr, Peter Buck’s chiming guitars radiate rawness and muscular melodies, not least on the cerebral ‘Gardening at Night’, the country-tinged ‘So. Central Rain (I’m Sorry)’ and, one of their best songs, the bittersweet sweeps of ‘Fall On Me’, where Mills contributes some of his finest throat work.

In the 1990s, R.E.M. were heavily involved in the alternative rock movement, rubbing shoulders with Sonic Youth (Thurston Moore contributed sardonic backing vocals to the band’s sarcastic cruncher ‘Crush With Eyeliner), Nirvana (the gloomy, metallic fuzz of ‘Let Me In’ was penned as a tribute to Cobain) and Radiohead, who toured with the band in 1995. Like the latter, and The Beatles before them, R.E.M. saw it as their duty to evolve and develop, turning out albums of gloomy, jangly introspection (New Adventures In Hi-Fi) and experimental trip-hop (Up).

It’s ironic that R.E.M. are not speaking to the current indie climate, for their 1994 record Monster could serve as a sterling companion to such a clique. Monster is no misnomer; dark, ugly and unsettling, it shows the grimly realistic side of modern living, seeking the love of celebrity from deeply concerned outsiders. “I don’t want to be Iggy Pop, but if that’s what it takes”, he urgently yells on ‘I Took Your Name’; “you said that irony was the shackles of youth” he reminds on ‘What’s the Frequency, Kenneth?’. Even the record’s sweetest sounding song, ‘Strange Currencies’, has the unseemly feel of thwarted desperation.

R.E.M. are legends, of course; ask any 30+ person and they’ll tell you that. But their wiry, jangly guitars, peerless harmonies and mysterious mannerisms mean they deserve to be passed down more than ever. In the wake of repercussions, I shall sign off with ‘Electrolite’’s stunning final words: “I’m not scared…I’m outta here.”