Despite being a Grade II listed building built way back in 1897 (for the once mighty Ansells Brewery) and overlooking the stunning remains of Curzon Street Station, until recently The Woodman was in grave danger of going the way of so many of our historic pubs. Happily it’s been saved (not a moment too soon by all accounts) by the good folk behind The Wellington and Post Office Vaults and, following a monumental effort, it reopened last September. By some miracle, many original features survived giving the place a wonderfully cosy feel and the bits that had to be replaced are difficult to distinguish. There’s an equally pleasing choice of real ales on offer (at least six with a Real Ale of the Day for just £2.70 a pint) plus lagers and ciders (decent stuff, none of your Carling and Blackthorn muck here) and pub grub on offer (everything from a full English through to steaks, burgers and a traditional Sunday roast) and whilst it may seem a little off the beaten track, it’s actually just a mere minute or two from the Bullring. A hidden gem. 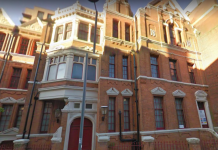