The new Library of Birmingham is the perfect home for Volume, a three-day celebration of books and independent publishing. Arts editor Dan Cooper-Gavin casts his eye over what’s in store.

Birmingham’s brand-new £189 million Library is one hell of a statement about the value of the book, an investment which met with no little head scratching in the age of Google and the iPad.  But while the Library of Birmingham was at pains to point out its worth beyond the printed word, books naturally lie at its heart.  As the venue’s wonderful Discovery Season draws to a close, it’s fitting that it should bring us Volume: Birmingham’s Art, Book And Print Fair – and vital that, in addition to celebrating the importance, craft and splendour of ink on paper, it also examines the future prospects for publishing in the digital era.

The festival begins on Thursday December 5, with the opening day’s highlight being a keynote speech from none other than Bill Drummond, one half of notorious art terrorists The KLF and latter-day man of letters.  He’ll be looking back at the books that have been the fruits of his post-KLF labours.  Also on the bill is an immensely promising “punk rock design performance” courtesy of artist Morag Myerscough and psychobilly rockers The Highliners.

Thursday also brings a dedicated workshop focussing on Writing For Digital, while West Country creative outfit iShed chair a discussion on the possibilities that technological advances might bring for writing and publishing.

Friday’s panel comes courtesy of Brummie graphic-design outfit An Endless Supply.  In it, Dutch-based designer Peter Bil’ak discusses Works That Work, his magazine about “unexpected creativity that improved our lives”.  He’ll also speak about the publication’s so-called social distribution model, whereby the readers identify suitable stockists for the magazine, claiming a percentage of the profits and helping to drive custom towards independent bookshops.

Saturday’s discussions begin with Copy Rights, an examination of copyright law with a specific focus on The Piracy Project – an intriguing initiative exploring the creative art of appropriating existing texts, and thus calling into question concepts of originality and authorship.

It’s followed by Roads To Market, a symposium hosted by Writing West Midlands, examining trends in book buying and publishing and exploring the future prospects for the industry, before Digbeth’s Eastside Projects presents The Paperless Stack, where representatives from libraries and the worlds of design and publishing talk about the role of the library in the digital age.

We also get Make It And Tell Everybody, presented by Birmingham Zine Festival, where illustrator and lecturer Dan Berry reveals the tips of the trade of the comic artist and offers advice to up-and-comers.  For all panel discussions, you’re advised to book in advance.

But Volume’s not just about chat – there’s also a range of free workshops where you can roll your sleeves up and get your hands dirty.

The practice of letterpress printing may seem archaic, but it has recently seen something of a revival.  The Leicester Print Workshop promotes the craft of printmaking as a contemporary art form, and will be on hand on Friday to run a letterpress workshop (again, booking is essential).

Then, on Saturday, eco-friendly print collective the Footprint Workers Co-Operative present Zine In A Day, giving you the chance to contribute towards a limited-edition zine exclusive to Volume, while in the Children’s Library you can muck in with artist Stephen Fowler’s Roller Printing workshop.

Also, Sarah Bodman and Tom Snowden from the Centre For Fine Print Research will hold Artists’ Book Surgeries in the Studio, inviting you to stop by and chat to them about any aspect of artists’ book production that takes your fancy.

In addition to the free workshops, you can pay £4 and sign up for Birmingham Printmakers’ Introduction To Reduction Lino Printing class, where one piece of lino is used multiple times in the same print.

There’s also a performance in the Library’s Book Rotunda of Hic Jacet or The Corpse In The Crescent, supposedly the only radio play on the subject of printing – a grisly tale of the death and afterlife of the Enlightenment-era printer John Baskerville.

Volume also presents a Fair, with all manner of independent publishers, artists and print works displaying and selling their wares.  And for the duration of the festival, Lara Haworth and Lucy Hayhoe present The Library Project in the Discovery Pavilion, a miniature library where they’ll host bookbinding workshops.

Volume is a bold, inspiring and timely festival, celebrating the value and beauty of the printed word and drawing strength from the relentless march of technology, rather than shying away from it.  Now you’ve read all about it, crack the spine and get stuck in.

Volume runs from December 5-7 at the Library of Birmingham. 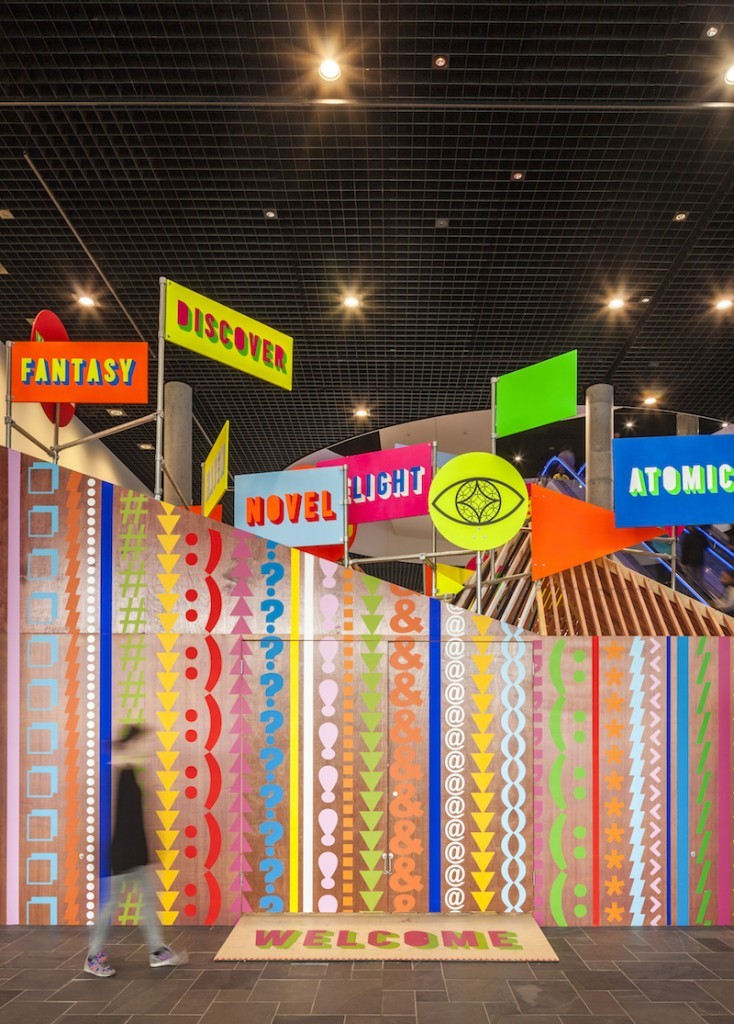 The Discovery Pavilion by Morag Myerscough at the Library of Birmingham. Photo by Gareth Gardner.