With Supersonic returning to Birmingham this month, Table Scraps drummer Poppy Twist looks ahead to the city’s most adventurous festival.

ADVENTUROUS! DIVERSE! These are words used to describe Capsule’s now-notorious Birmingham music festival as it heads for its 12th year. Not yet a teenager, Supersonic has nonetheless become a destination for the weird, the outlandish and the experimental.

This year’s line-up, spanning four glorious days (Thursday June 11 to Sunday June 14), is set to be all the festival is known for, and then some. Case in point: the opening gala (disclaimer: it’s not officially called a gala, I just like that word) will be from the Will Gregory Moog Ensemble (pictured above) at Birmingham’s Town Hall. Will, the less visible, non-eponymous member of synthpop darlings Goldfrapp, is now at the helm of a 10-musician retro-technophile’s wet dream; this is an absolute must see for Moog-ites and those with an affinity for unusual orchestras. 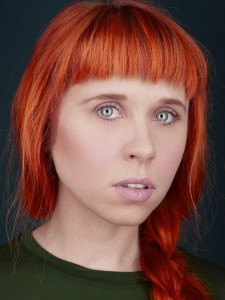 In usual dazzling and ambitious style, Saturday night promises a choice of two headliners to satisfy Supersonic’s hybrid crowd. American composer Holly Herndon (pictured right) is currently blurring the line between the human and the technological through her music more adeptly than anyone else right now – her implosion of underground club music, pop and sound art looks over the edge at the future.

For fans of daring collaborations, The Bug vs Earth will be too exciting to miss, and not only because it makes its debut at Supersonic. Kevin Martin and Dylan Carlson are both long-established figures presiding over the fringes of heavy music and together they’ll be dealing a blow of brutal electronica.

Also on the bill, and with an effusive late-90s endorsement from Purveyor of Quality™ Nick Cave uploaded to YouTube for posterity, dub-flecked-post-punk pioneers The Pop Group recently resurrected with the rollicking Citizen Zombie. The album sounds exactly like you’d expect from a band cryogenically frozen in the 80s and recently warmed up in the microwave – it’s Marmite but that’s the joy of Supersonic.

Moving on, and citing the film work of body-horror aficionado Cronenberg as inspiration, Elizabeth Bernholz AKA Gazelle Twin is masterfully adept at conjuring the monster within. Clad in a skin-coloured mask and a blue hooded two-piece that one could liken to the sartorial choices of a bank robber, Bernholz is lyrically black metal, but takes the horror-music crossover to a place that is exhilaratingly new and now.

An amalgamation of Efterklang and eccentric percussionist Tatu Rönkkö, Scandinavian four-piece Liima (pictured above) have already spent an idyllic summer residency at Finland’s One Festival. The resulting ambient sound tapestries evoke lying next to a babbling brook with the sun on your face, a rather pleasant auditory experience (and also the most pretentious thing I have ever written).

Portland psych-rockers Eternal Tapestry also grace the line-up, fresh from releasing their 2015 album Wild Strawberries. Themed around fruits and vegetables local to the secluded spot in which the album was jammed (not a pun) out, their shtick is all that is great about psych: chance-taking, freewheeling and hypnotic. Now, I bloody hate boy-girl duos, but Happy Meals’ ‘thing’ is a frankly gorgeous meeting between squelching synth lines and a French-pop chanteuse. They hail from (you guessed it) Glasgow.

The line-up, frankly, is huge – so let me whir you through the rest. In the south-east corner we have future jazz outfit Tomaga, globetrotting experimentalists Flamingods, Lowest Form break-away Apostille, sax-and-organ wielders Sex Swing, and Ravioli Me Away – who kicked ass at Supersonic’s Xmas Cocktail. From Denmark we have quintet Selvhenter, part of the prolific Copenhagen-based collective Eget Værelse. Representing Northern Ireland we have the very Velvets-y Woven Skull, and Indiana’s Circuit des Yeux will offer the extraordinary, rich baritone voice of Haley Fohr.

There’s also plenty to marvel at and participate in beyond the stonking musical line-up. How about signing up for a rare participatory session with Six Organs Of Admittance’s Ben Chasny, or the opportunity to build a synthesiser at a Dirty Electronics workshop? An exhibition at Millennium Point explores the history of programmable instruments through the museum’s collection of Victorian music boxes and tabletop organs and A Folded Path, a pedestrian speaker symphony, offers the opportunity for the audience to participate in a piece of music tailor made from the sounds of Birmingham’s streets.

Finally, to close on the Sunday, songwriter Richard Dawson has curated Delight Is Right, an afternoon of performance featuring retro-Ethiopian artist Afework Nigussie, Czech street musician Jiri Wehle, Angharad Davies, Rhodri Davies and Phil Tyler. The final curtain on Supersonic will offer an enchanting mash-up of ethnic, traditional, experimental and medieval music with folk narration. Supersonic’s wunderkabinett of delights and rollicking good time is definitely not to be missed. Be there!