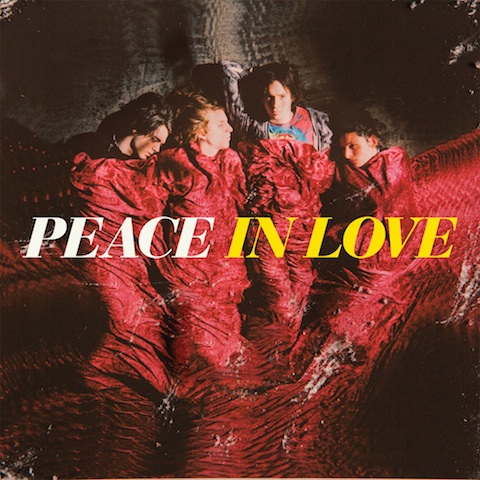 When Peace signed to Columbia Records in May last year, it was a cue for the Birmingham buzz band to come up with something solid.

Already having a strong internet presence, the rip rollicking Bblood, and the backing of much of the national music press to recommend them, Peace were nevertheless a bold statement of belief for the established label. However, despite only having formed in late 2010, September’s EP Delicious made a super (if a little incoherent) start and three of their tracks made the NME’s 50 Best Tracks of 2012 list. It’s now spring 2013 and Peace’s debut record In Love is what all of this has been in preparation for.

What’s clear from the very opening bars of In Love is that this is a record from a band who have been on tour with Mystery Jets. More than that, it’s a record from a band who have grown up listening to Mystery Jets and listening to a lot of other bands besides whom it is both lyrically and musically indebted to; that comes through – there is a lot of derision and it becomes a fun game to play ‘spot the influence’. However In Love is also much more consistent than Peace have ever been. Driving singles Follow Baby and Wraith slot in amongst the slower and more lucid numbers perfectly and lead singer Harry Koisser has managed to pen an anthemic sing-along chorus for just about every one of them. Delicious and Waste of Paint are both in command of some genuinely great guitar playing and everything is held together by a vocal which at times merely sneers over the top. It’s all pretty effortlessly cool.

There are some omissions. Though released as the band’s debut and standalone single, Bloodshake is notable by its absence and the tracklisting misses it. Moreover, a couple of the numbers (Lovesick in particular) are a little lyrically predictable and lightweight. The record is daringly short, clocking in at just over 35 minutes and yet by Sugarstone you almost find yourself wishing they’d substituted it for another more upbeat track.

However, it really is a gorgeous debut. What Peace have mustered through this record is a comment on love taking in some of its most beautiful and most lucid forms. It’s both nostalgic in its debt to 90s guitar bands and current in its embrace of pop culture and perhaps it’s that ability to fuse the two which marks Peace’s appeal.

Released a constructive distance from festival season (and with some killer appearances already booked at Bestival, Reading/Leeds and Primavera), In Love guarantees to build the Birmingham boys’ already solid fanbase into something electric by the summer. So look out for them then as they present to the nation and indeed beyond, an album which does exactly what it says on the tin and tastes, ever so deliciously, like sunlight.

In Love by Peace is released on March 25 through Columbia. Buy it from Amazon here.